SECNAV Names New Destroyer in Honor of US Senator from Alaska 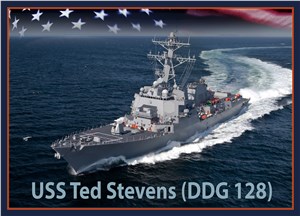 Secretary of the Navy Richard V. Spencer named a future Arleigh Burke-class guided-missile destroyer in honor of U.S. Senator Ted Stevens, who represented Alaska from 1968 to 2009.

“Senator Stevens was a staunch supporter of a strong Navy and Marine Corps team who served our nation with distinction as a pilot during World War II, and later as a Senator of Alaska,” said Secretary of the Navy Richard V. Spencer. “I am pleased that his legacy of service and dedication to national security will live on in the future USS Ted Stevens.”

Stevens served as a pilot in the Army Air Corps from 1943 to 1946 and was awarded the Distinguished Flying Cross before being discharged in 1946. Stevens was elected as a state representative in Alaska in 1964, re-elected in 1966, and in 1968 he was appointed to fill a vacancy in the U.S. Senate. In 1970, Stevens was elected to the seat in a special election and was subsequently re-elected five times.  He left office in 2009 as the then-longest serving Republican U.S. Senator in history.

Arleigh Burke-class destroyers conduct a variety of operations from peacetime presence and crisis response to sea control and power projection. The future USS Ted Stevens (DDG 128) will be capable of fighting air, surface and subsurface battles simultaneously, and will contain a combination of offensive and defensive weapon systems designed to support maritime warfare, including integrated air and missile defense and vertical launch capabilities.

The ship will be constructed at Huntington Ingalls Industries’ Ingalls shipbuilding division in Pascagoula, Miss.. The ship will be 509 feet long, have a beam length of 59 feet and be capable of operating at speeds in excess of 30 knots.

Tell a friend:
SECNAV Names New Destroyer in Honor of US Senator from Alaska