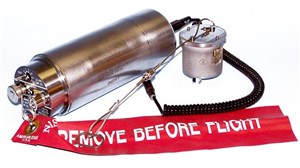 The U.S. Department of Defense (DOD) announced on November 14, 2018, that the U.S. Air Force (USAF) has awarded a contract modification to Option 14 of its Joint Programmable Fuze (JPF) order with the Aerospace segment of Kaman Corporation (NYSE:KAMN). The modification has a value of $52.0 million and raises the total value of Option 14 to $121.4 million.

"We are proud to be the sole provider of the JPF to the USAF and are happy to support the additional JPF requirements under Option 14. Our investments in this program have prepared us to support the increased demand in JPF from the USAF and Foreign Militaries. Over the past year we have received JPF orders in excess of $600 million and continue to discuss future options with the USAF while pursuing additional JPF orders with foreign militaries. With the mission flexibility and high reliability rates the JPF offers, we believe that it will continue to be a strong contributor for many years to come," stated Richard Barnhart, President, Kaman Aerospace Group.

Kaman has been the sole provider of the JPF to the USAF since 2002. In addition to the USAF, Kaman provides the JPF to thirty-six other nations. The JPF allows the settings of a weapon to be programmed on wing in flight and is the current bomb fuze of choice of the USAF. The JPF is used with a number of weapons including general purpose bombs, and guided bombs that use JDAM or Paveway kits, on U.S. aircraft such as F-15, F-16, F-22, F-35, A-10, B-1, B-2, B-52 and the MQ-9 UAV as well as on international aircraft such as Mirage 3 and Gripen. Kaman produces the JPF at facilities in Orlando, Florida and Middletown, Connecticut.