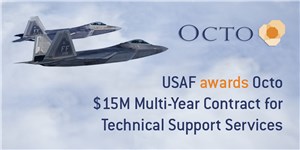 Octo Consulting Group (Octo), a premier next-generation IT services provider to the Federal Government, today announced the company has been selected for a new multi-year award contract by the Secretary of the Air Force, Financial Operations (SAF/FMF), valued at more than $15 million. As part of the contract, Octo will develop, maintain, and sustain the Air Force Financial Systems Operations (AFFSO) software systems. The partnership will support several U.S. Air Force applications, including eFinance, LeaveWeb, and FMSuite.

As part of an effort to automate the completion of financial processes and documents, Octo will help optimize the eFinance and FMSuite systems. These two applications integrate financial management processes to streamline, track, and automate critical Air Force budgetary, financial planning, and compliance activities. The third system, LeaveWeb, is the application used by all active duty Air Force members to request, approve, and process military leave requests. LeaveWeb is the only financial management system used by every active duty Air Force member, and supports more than 2 million transactions annually. The work will be performed on Wright-Patterson Air Force base in Dayton, Ohio.

“Octo is excited to support AFFSO’s development and sustainment of the LeaveWeb, eFinance, and FM Suite applications,” said Jim Vant, Executive Vice President - Defense & Intelligence. “We are pleased that the Air Force selected our team to lead this mix of sustainment and modernization work. This represents an exciting foray into the Air Force IT development space as well as into the Wright-Patterson Air Force Base community.”

With this win, Octo expands its technical services into the Office of the Secretary of the Air Force joining Octo’s existing and historical support to the Army, Navy, Air National Guard, and the Intelligence Community.