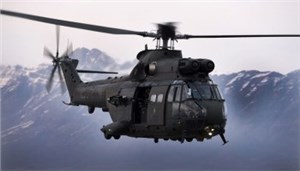 Just months after providing vital relief in the Caribbean, a £100 million deal to provide future support to the Royal Air Force’s fleet of Puma HC Mk2 helicopters through to March 2022 has been agreed.

The deal will sustain around 25 jobs at Airbus Helicopters UK Ltd in Oxfordshire at the company’s base in Kidlington and at RAF Benson, where the front line squadrons are based and many more across the supply chain.

The support arrangement will enable planned and responsive Puma operations to take place and ensure the maintenance of the aircraft as it provides support to ground troops on the battlefield and to civil and emergency services responding to disasters and emergencies.

This £100 million investment will ensure our Puma helicopters continue to transport British troops and kit to the front line – helping us provide vital support quickly in rapidly evolving situations.

The deal - part of our £178 billion Equipment Plan - will not only give our Armed Forces the kit they need to deal with intensifying global threats, but will also sustain British jobs at Airbus Helicopters.

The contract, which is intended to eventually provide support until the Puma HC Mk2 out of service date, currently planned for March 2025, will provide technical services to support safety management and fault investigation and materiel support including repair and overhaul of major components. It will also provide a training service for RAF maintenance engineers.

The Puma HC Mk2 was the first helicopter deployed to the Caribbean from the UK to provide emergency humanitarian relief to the islands left devastated by Hurricane Irma back in September 2017.

Deploying rapidly, the aircraft provided relief to people who saw their homes destroyed and helped deliver supplies and aid as part of the wider UK emergency response within 72 hours of receiving the call. Separately, the Puma HC Mk2 has been deployed to Afghanistan since 2015 as part of the UK’s contribution to the NATO Afghanistan Mission named Operation RESOLUTE SUPPORT.

The Puma HC Mk2 is carrying out a vital role in troop transport, load movement and humanitarian operations around the world. The upgraded helicopters represent a significant increase in capability over the Mk1.

This support arrangement, which embraces learning from the early days of operating the Mk2 aircraft, will ensure that cost-effective support is always available to allow the user to deliver the capability wherever and whenever it is needed.