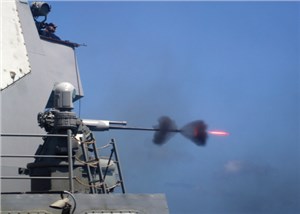 Irving Shipbuilding of Canada has awarded BAE Systems a contract to deliver up to six modified 25mm Mk 38 Machine Gun Systems for the Royal Canadian Navy’s Arctic Offshore Patrol Ship (AOPS) program. The award also covers spare parts, technical support, and long-term field support services. Irving Shipbuilding is the prime contractor for the ships and will build them at its Halifax shipyards.

“We will be working very closely with Canadian industry on this program,” said Joseph Senftle, vice president and general manager of Weapons Systems at BAE Systems. “BAE Systems is currently selecting its Canadian partners to participate not only in the build of these naval gun systems, but also to join our Mk 38 global supply chain. This will help bring sustained economic value to Canada as part of the AOPS program.”

The AOPS program will introduce six vessels that can patrol the Arctic region and remain there for longer than the service's existing ships to support sovereignty and surveillance operations. BAE Systems’ first gun system will be delivered in 2017, with follow-on deliveries of approximately one per year through 2021, as the AOPS ships are built and become ready for launch.

Each Mk 38 System features a highly accurate gun targeting and surveillance system as well as the M242 Cannon. They will be modified for protection against arctic conditions. The Mk 38 has also been selected by the U.S. Navy, U.S. Coast Guard and the Spanish Navy.