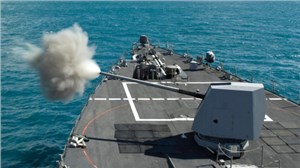 The U.S. Navy has awarded BAE Systems a contract to overhaul and upgrade Mk 45 systems on U.S. Navy Destroyer Class (DDG) ships. The initial contract of approximately $80 million includes the upgrade of six guns to the Mod 4 configuration, with an option for four additional guns expected to be exercised in 2016, bringing the full value of the contract to $130 million.