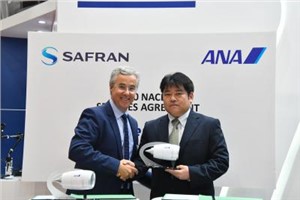 This 10-year agreement will allow All Nippon Airways (ANA) to benefit from OEM*-guaranteed maintenance, repair and overhaul (MRO) solutions based on in-service experience at Safran Nacelles repair stations. The airline will also have access to Safran Nacelles' shared pool of spare parts and components, as well as the positioning of a spare nacelle air inlet at Honolulu. Providing the spare air inlet ensures on-site availability at ANA's destination in the mid-Pacific Ocean.

ANA is Japan's largest airline and the latest A380 operator, receiving its first two of three aircraft earlier this year for use on the popular route between Tokyo and Honolulu in the U.S. Hawaiian Islands.

"We are proud and honoured to support and serve All Nippon Airways, joining the growing number of airlines that benefit from NacelleLife™, with our coverage tailored to this carrier's specific needs on its Japan-Hawaii operations," said Olivier Savin, Safran Nacelles' Executive Vice President - Customer Support & Services.

Safran Nacelles' is the original equipment manufacturer for the A380's engine nacelles, and its NacelleLife™ program offers complete coverage for these flight systems with responsive, cost-effective and high-quality services that keep airliners in operational condition while minimizing repair costs.

Safran Nacelles' service package offers airlines and lessors a maintenance service adapted to their most specific requirements for one or all steps in the life cycle of their fleets, from pre-entry into service for an aircraft until it is withdrawn from, or returned to, operation.

Since the launch of NacelleLife™ in 2018, Safran Nacelles has signed more than 10 contracts for the program with several Asian, European, American and more operators.

Tell a friend:
All Nippon Airways signs for Safran's NacelleLife nacelle support on A380 jetliner fleet