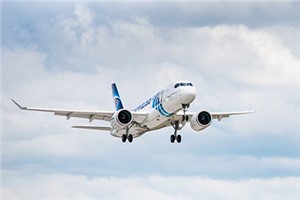 “Taking delivery of a new aircraft is always a special milestone – and today we are proud to welcome our first A220 aircraft.  The fuel efficiency of the Pratt & Whitney GTF engines plays a large role in powering the evolution of our fleet, and this delivery is another step towards that,” said Captain Ahmed Adel, Chairman & CEO of EgyptAir Holding Company.

“The history between Pratt & Whitney and EgyptAir dates back to 1946 with the Beechcraft Model 18 aircraft powered by the Pratt & Whitney WASP engines,” said Rick Deurloo, chief customer officer and senior vice president, Customers at Pratt & Whitney.  “Since then, we have been proud to power EgyptAir aircraft over the past several decades, and now, partner together in the expansion of their fleet with the GTF-powered A220s.

The A220, exclusively powered by the GTF engine, offers double-digit improvement in operating costs compared to current generation aircraft.  It’s 20% more fuel efficient and provides a 75% reduction in noise footprint and NOx emissions 50% below the ICAO CAEP 6 regulation.