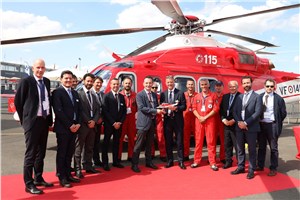 Leonardo announced new signed contracts for five additional AW139s to the Italian National Fire Corps (Vigili del Fuoco, part of Ministry of the Interior), including integrated logistic support and training for crews and technicians. The orders, valued at over €75 million, add to the previously purchased three units, with two already delivered this year. The five new helicopters are expected to be delivered in June 2020.

The Italian National Fire Corps intends to progressively replace the decades-old AB412s helicopters and to guarantee optimal coverage and increased responsiveness across the country. Indeed, the introduction of the AW139 marks a major enhancement of airborne multirole capabilities with the world’s most modern helicopter for maritime and mountain Search and Rescue (SAR), medical rescue, firefighting and disaster relief duties. The fleet modernization programme includes an option for seven additional helicopters which could be added to the eight already ordered.

Note to editors on the AW139 helicopter
The 7 tonne AW139 design incorporates a large spacious cabin accessed by two sliding doors, powerful engines that deliver class leading performance and safety, making it the aircraft of choice in its weight class. Excellent one engine inoperative capability ensures the aircraft can accomplish the most demanding missions while maintaining the ability to fly away safely in the rare event of an engine failure.

In Italy the AW139 has also been selected by the Italy’s Guardia di Finanza, State Police, Coast Guard and Air Force in addition to several emergency medical service operators. The various Italian Government agencies operating the AW139 are able to benefit from shared logistics, training and support systems. This latest order by the National Fire Corps, brings the total number of AW139s chosen by all of these Italian Government operators to 61, covering a wide scope of public utility roles including law enforcement and homeland security, patrol, special operations and anti-terrorism, search and rescue, firefighting, command and control, government/VVIP transport, disaster relief and training.

Many law enforcement and security agencies from countries around the world, including Italy, the UK, USA, Japan, Republic of Korea, Malaysia, Sweden, Spain, Estonia, The Netherlands, Brazil, UAE, Oman and Croatia have selected or are already operating the AW139 to fulfil their requirements. Over 270 customers from around 70 nations have already ordered over 1100 AW139s, more than 950 of which are in service, confirming itself as the bestselling aircraft in its category.