A reasonably small 4-8 m asteroid recently flew by Earth, passing close to satellites orbiting in the geostationary ring at a distance of about 42 735 km from Earth's centre and only about 1200 km from the nearest satellite. 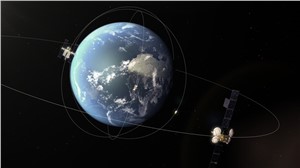 After the initial discovery, observers around the world rapidly set their eyes on the ‘new’ space rock, determining it would safely pass our planet in one of the closest flybys ever recorded.

While the asteroid, now named 2020 HS7, came close to the geostationary ring, it passed ‘under’ the nearest satellite and posed no major risk as their orbits did not intersect.

The night before, one of the Pan-STARRS survey telescopes had spotted an unidentified object flying through space. Less than an hour of observations showed that this object was already extremely close to Earth, with a roughly 10% probability of collision the following day.

Rapid global response deems asteroid small and safe
Observers around the world quickly joined the effort to find out more about this unknown asteroid. Only 50 minutes after the initial Pan-STARRS report was released, the Xingming Observatory in China obtained the first follow-up ‘astrometry’ - data on its position, motion, and brightness.

Soon after, the Tautenburg observatory in Germany – a frequent collaborator with ESA’s Near-Earth Object Coordination Centre, part of the Planetary Defence Office – monitored the space rock, after the Agency alerted them to it and asked for immediate observations.

With this data, it became clear that the object was not going to collide with the Earth, but it was heading towards a very close fly-by the following day, roughly at the distance of Earth's geostationary ring.

At just a few metres in size, 'P20ZIf8' would not have caused any significant threat if it had been on a collision course, as it would likely have burned up in Earth’s atmosphere.

Despite posing no threat to Earth, the detection, follow-up and characterisation of this new asteroid was an interesting exercise, testing the discovery and rapid follow-up capabilities of observers worldwide.

One of the closest asteroids to fly by
Subsequent observations obtained by additional ESA collaborators and many other observatories worldwide determined that the flyby of the asteroid, now named 2020 HS7, ranks among the 50 closest ever recorded.

That these numbers are so precise, shows that the trajectory of a nearby object can be established with exquisite accuracy even with just a day’s worth of data, if good observational coverage can be obtained.

Interestingly, the fly-by happened only 15 hours before the closest approach of (52768) 1998 OR2, a much larger kilometre-sized object that attracted the attention of the worldwide media. However, this latter object approached our planet at a distance 16 times farther than the Moon (more than 6 million kilometres away), while 2020 HS7 came significantly closer to us, representing a more significant event for the astronomical community.