Crews working around the clock at more than 150 airports nationwide 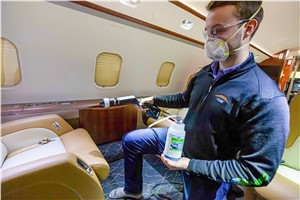 Constant Aviation is working around the clock to treat business and private aircraft with MicroShield 360, an FDA-approved* antimicrobial shield. Since March 9, the MRO and its authorized partners have applied the product to more than 250 aircraft – including the entire Flexjet fleet of private aircraft. The number of aircraft treated is expected to double by the end of the month. Application crews are now present at more than 150 airports nationwide, and technicians have streamlined the process to less than two hours even on large- cabin aircraft.

“We recognize the urgency operators have to treat their aircraft to help protect passengers, crews and maintenance technicians from bacteria and germs,” said Constant Aviation Chief Executive Officer David Davies. “That’s why we have dedicated more resources to this program. Our objective in expanding the applicator network to airports nationwide is to make it as convenient and efficient as possible for aircraft to be treated.”

MicroShield 360 is a proprietary antimicrobial coating system that kills 99.99 percent of bacteria. It has been tested for effectiveness and durability, ensuring that treated surfaces are reducing germs 24/7. The coating is clear, colorless, odorless, non-toxic and hypoallergenic and safe for humans and animals.

Each MicroShield 360 application consists of a three-step process: First, an electrostatic disinfectant is applied to all surfaces; then a second, specially formulated disinfectant is applied; finally, a proprietary coating imparts a biostatic finish to treated surfaces, preventing pathogens from living on them going forward.

Since it constantly reduces microbial contamination of bacteria, viruses, mold, algae, yeast, mildew, fungi and odors, the MicroShield 360 coating can play an important role in helping to protect passengers and crew from a wide range of illnesses. These include MRSA, E. coli, Norovirus, C. diff, flu strains, gram-positive and gram-negative bacteria, enveloped viruses including the common cold and more than 90 additional diseases and conditions.

MicroShield 360 is available for all commercial, private and business aircraft. It is offered exclusively through Constant Aviation, the only aircraft maintenance repair organization with access to the treatment.