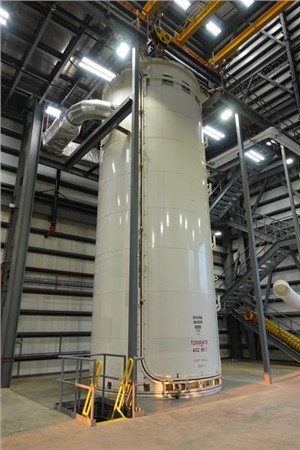 Aerojet Rocketdyne has installed a steel casting bell to support production of large solid rocket motors, marking an important milestone for completion of its Engineering, Manufacturing and Development (EMD) facility in Camden.

The vacuum chamber casting bell was relocated from Aerojet Rocketdyne’s Sacramento, California, facility, where it was used to produce large rocket boosters for the Atlas V rocket. In Camden, it will be used to produce large solid rocket motors for programs, including hypersonics and intercontinental ballistic missiles. The Camden facility will be able to produce motors up to 470 inches long and up to 100 inches in diameter.

“The installation of the casting bell is a major milestone as Aerojet Rocketdyne continues to prepare for national security programs, including the Air Force’s Ground Based Strategic Deterrent program and the Missile Defense Agency’s Next Generation Interceptor program,” said Eileen Drake, Aerojet Rocketdyne CEO and president. “I would especially like to thank state and local leaders from the great State of Arkansas whose efforts have been critical to our ongoing expansion here in Camden.”

The casting bell is a vacuum chamber that eliminates air bubbles that can otherwise form when propellant is poured into solid rocket motor casings. The chamber also serves as an oven that heats the propellant during the curing process, and then cools it back down to ambient temperature.

Aerojet Rocketdyne broke ground on its 17,000 square-foot EMD facility in spring 2019 as a part of an ongoing expansion of its Camden operations, where the company has had a presence since 1979. The $15.5 million state-of-the-art facility is slated to open this spring.

The expansion plan included investing in new infrastructure and creating more than 140 jobs by 2021. Working in partnership with the Arkansas Economic Development Commission and Calhoun and Ouachita Counties, more than $50 million dollars is being invested in the ongoing expansion.