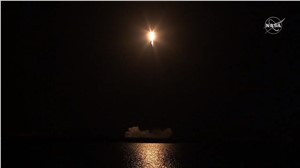 A SpaceX Dragon cargo spacecraft is on its way to the International Space Station after launching at 11:50 p.m. EST Friday. Dragon will deliver more than 4,300 pounds of NASA cargo and science investigations, including a new science facility scheduled to be installed to the outside of the station during a spacewalk this spring.

The spacecraft launched on a Falcon 9 rocket from Space Launch Complex 40 at Cape Canaveral Air Force Station in Florida and is scheduled to arrive at the orbital outpost on Monday, March 9. Coverage of the spacecraft’s approach and arrival at the space station will begin at 5:30 a.m. EDT on NASA Television and the agency’s website.

Dragon will join three other spacecraft currently at the station. When it arrives, NASA Flight Engineer Jessica Meir will grapple Dragon, backed up by NASA’s Andrew Morgan. Coverage of robotic installation to the Earth-facing port of the Harmony module will begin at 8:30 a.m.

Dragon is scheduled to remain at the space station until April 9, when the spacecraft will return to Earth with research and cargo.

Here are details about some of the scientific investigations Dragon is delivering:

New Facility Outside the Space Station
The Bartolomeo facility, created by ESA (European Space Agency) and Airbus, attaches to the exterior of the European Columbus Module. Designed to provide new scientific opportunities on the outside of the space station for commercial and institutional users, the facility offers unobstructed views both toward Earth and into space. Potential applications include Earth observation, robotics, material science and astrophysics.

Studying the Human Intestine On a Chip
Organ-Chips as a Platform for Studying Effects of Space on Human Enteric Physiology (Gut on Chip) examines the effect of microgravity and other space-related stress factors on biotechnology company Emulate’s human innervated Intestine-Chip (hiIC). This Organ-Chip device enables the study of organ physiology and diseases in a laboratory setting. It allows for automated maintenance, including imaging, sampling, and storage on orbit and data downlink for molecular analysis on Earth.

These are just a few of the hundreds of investigations providing opportunities for U.S. government agencies, private industry, and academic and research institutions to conduct microgravity research that leads to new technologies, medical treatments and products that improve life on Earth. Conducting science aboard the orbiting laboratory will help us learn how to keep astronauts healthy during long-duration space travel and demonstrate technologies for future human and robotic exploration beyond low-Earth orbit to the Moon and Mars.

For almost 20 years, humans have lived and worked continuously aboard the International Space Station, advancing scientific knowledge and demonstrating new technologies, making research breakthroughs not possible on Earth that will enable long-duration human and robotic exploration into deep space. As a global endeavor, 239 people from 19 countries have visited the unique microgravity laboratory that has hosted more than 2,800 research investigations from researchers in 108 countries.