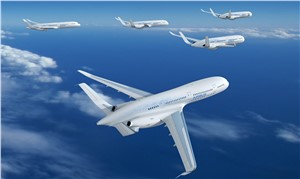 If the aviation industry is to significantly reduce the CO2 emissions of current and future aircraft, a “one-size-fits-all” approach is no longer enough. Today, innovative aircraft design, new engine technology and improved air traffic management are collectively contributing to the industry’s long-term decarbonisation strategy.

Today’s aircraft are lighter and more fuel-efficient than they were 50 years ago. In fact, improved fuel efficiency in aircraft has helped to save billions of tons of CO2 since 1990.
And innovation—notably in aircraft design, engine technology and air traffic management—is showing real promise in this respect. In fact, improvements in these areas have already helped to improve fuel efficiency by 2.1% annually between 2009 and 2020. As the aviation industry embarks on the path towards sustainable aviation, innovation across a variety of areas will undoubtedly play an even greater role in improving aircraft efficiency and performance.

Rethinking aircraft design
Today’s aircraft are lighter and more fuel-efficient than they were 50 years ago. In fact, improved fuel efficiency in aircraft has helped to save billions of tons of CO2 since 1990. However, the architecture of commercial aircraft has remained largely unchanged, so adapting new technologies to existing configurations has been a real challenge. But what if aircraft design could be completely revisited? Unveiled at the 2020 Singapore Air Show, the MAVERIC aircraft demonstrator is doing just that.

The “blended wing body” design—featuring a wide cabin layout—could reduce fuel consumption by approximately 20% compared to current single-aisle models with the same engine. The integration of various other types of propulsion systems is also a possibility thanks to the spacious configuration, which opens up the design space in new and exciting ways.

Although MAVERIC is currently a small-scale, remote-controlled demonstrator, the project will accelerate understanding of new aircraft configurations that could help deliver real environmental benefits.

New engine technology to reduce CO2 emissions
Today’s commercial aircraft are generally equipped with four jet engines. A jet engine works by burning fuel to release hot exhaust gas. This gas is then forced through the blades of a turbine, making the turbine’s spinning wheels rotate and propelling the aircraft forward. Because conventional jet engines rely on fuel burn to operate, this technology is inextricably linked to CO2 emissions.

But what if little or no fuel was necessary to power engines? This is the idea behind electric and hybrid-electric propulsion. Composed of a rotor and a stator, an electric motor is powered by pulses of electricity from a power electronics device, which emits no emissions (NOx, CO2, particles, or otherwise). Similarly, hybrid-electric propulsion combines a conventional internal combustion engine with an electric-propulsion system, thereby reducing fuel burn.

The E-Fan X demonstrator, a model of which is on display at 2020 Singapore Air Show, is currently testing the potential of hybrid-electric technology to power a 100-passenger regional aircraft. Although the technology will not be mature until the 2030s timeframe (at the earliest), electric and hybrid-electric technology is expected to help the aviation industry to take a giant leap towards zero-emission flight over the long term.

One example is fello’fly, a demonstrator project that aims to understand how two aircraft flying approximately 3 kilometres apart—through the help of real-time flight tracking—could make a significant impact on aircraft’s environmental performance. The technology is based on “wake-energy retrieval,” which is inspired by the flight techniques of migrating birds. For aircraft, this involves harnessing lost kinetic energy by positioning a follower aircraft in the air upwash of the leader’s wake, thus providing free lift to reduce engine thrust. If the technology behind fello’fly proves viable, this collaborative activity could produce fuel savings of between 5-10% per trip. As a result, several tons of fuel and CO2 emissions could be saved during every fello’fly trip.