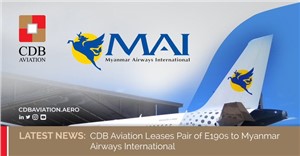 The Embraer jet duo will join the carrier’s all-Airbus fleet this summer. The E190s are anticipated to debut on flights within the Myanmar domestic market and some key international routes starting as early as August 2020, supplementing domestic and regional operations by sister carrier Air KBZ, according to the airline. MAI currently operates scheduled service to destinations in South East Asia from its main base at Yangon International Airport and Mandalay International Airport.

“We are delighted to be handing over the two E190s to our newest APAC customer MAI, marking the introduction of first-generation Embraer jets on the carrier’s expanding route network,” remarked CDB Aviation Chief Marketing Officer Peter Goodman. “This jet duo will fit well within MAI’s expanding operations, facilitating their planned development of Myanmar’s market.”

Kyaw Han, Chief Operating Officer of MAI, commented: “We are thrilled to operate the E190s, which will ensure MAI remains at the forefront of the aviation industry in Myanmar, with a modern fleet. The new aircraft also will enable the airline to offer better comfort in terms of jet product offering and higher capacity in response to the ongoing strong demand across its domestic and regional network.”

“This transaction adds to our team’s track record in placing the majority of our E190s coming off lease over the past year,” emphasized Patrick Hannigan, CDB Aviation Chief Executive Officer, adding that “our commercial team’s ongoing success is attributable to deep airline relationships across our vast network and our ability to comprehensively meet the airlines’ fleet requirements.“

Myanmar Airways International (“MAI”) operates from its hub in Yangon and Mandalay, serving 18 routes across Thailand, Singapore, China, Taiwan, South Korea, and India with a fleet of three A319s and one A320. Overall, MAI has approximately 12% of international seat capacity in Myanmar. As part of MAI’s ambitious growth plan, it plans to double its fleet size by the end of 2020. www.maiair.com

CDB Leasing is the only leasing arm of the China Development Bank and a leading company in China’s leasing industry that has been engaged in aircraft, infrastructure, ship, commercial vehicle and construction machinery leasing and enjoys a Chinese sovereign credit rating. It took an important step in July 2016 to globalize and marketize its business – listing on the Hong Kong Stock Exchange (HKEX STOCK CODE: 1606). www.CDBAviation.aero

CDB Aviation leases a pair of E190s to Myanmar Airways International, supporting the carrier's debut of the Embraer jets in domestic operations.