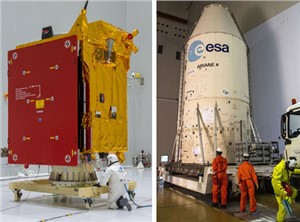 The payload integration process has begun for Arianespace’s upcoming Ariane 5 mission, which will place the JCSAT-17 and GEO-KOMPSAT-2B satellites in geostationary transfer orbit (GTO) during a nighttime launch from the Spaceport in French Guiana on February 18.

GEO-KOMPSAT-2B underwent its pre-launch fueling process in Spaceport’s S5 payload preparation facility, and has been transferred to the Ariane 5’s Final Assembly Building for integration on the launcher.

Produced by the Korea Aerospace Research Institute (KARI), GEO-KOMPSAT-2B will be installed in Ariane 5’s lower payload position, to be deployed as the second passenger during this mission.

After arriving at its operational slot in geostationary orbit, the spacecraft will be used primarily for monitoring the oceans and the Earth’s environment.

The mission’s other passenger, JCSAT-17, will ride in the upper position on Ariane 5. Built by Lockheed Martin for operation by Japan’s SKY Perfect JSAT Corporation, it will deliver telecommunications services across a coverage zone that includes Japan and areas extending 200 nautical miles from the coast.

Building upon success
The heavy-lift Ariane 5 launch with JCSAT-17 and GEO-KOMPSAT-2B is designated Flight VA252 in Arianespace’s numbering system, signifying the 252nd mission with an Ariane-series launcher. It will be Arianespace’s second Ariane 5 flight in 2020 from the Spaceport, following the January 16 success that delivered the EUTELSAT KONNECT and GSAT-30 satellites to GTO.

Arianespace’s fast-paced launch cadence for 2020 also included a medium-lift mission with Soyuz from Baikonur Cosmodrome in Kazakhstan, which was conducted with its Starsem affiliate on February 7 to deploy 34 satellites for OneWeb’s next-generation constellation.