Solar Orbiter Reaches for Our Star 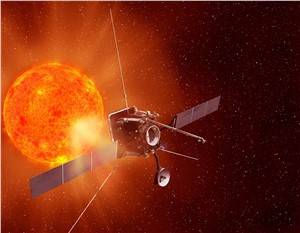 The European Space Agency (ESA) mission will study the Sun to improve our understanding of how it creates the heliosphere, the vast bubble surrounding the solar system. The satellite has 10 in-situ and remote sensing instruments, used to take photographs and spectra, and collect data on solar particles, the solar wind, solar flares and the Sun’s magnetic field.

Ian Walters, Airbus’ programme manager for Solar Orbiter said: “Today’s launch is a fantastic success for all the teams across Europe and America who have made this mission happen. We now look forward to the exciting discoveries that Solar Orbiter will make as it looks directly at the Sun.”

Solar Orbiter will use gravity assist manoeuvres around Venus, to achieve its elliptical operational orbit, approaching the Sun as close as 42 million km.

With the UK built satellite orbiting at such close distances it will have to endure temperatures exceeding 500°C, hot enough to melt lead. Its unique heat shield covered in a special heat-emitting coating called SolarBlack will protect the spacecraft behind the shield from the extreme heat of the Sun at this close distance.

ESA selected Airbus in Stevenage to design and build the satellite which began in 2012, and the mission is expected to have a lifetime of up to 10 years.

Tell a friend:
Solar Orbiter Reaches for Our Star