For the first time, an ESA deep space antenna has sent commands to two ESA spacecraft, simultaneously, at the Red Planet. 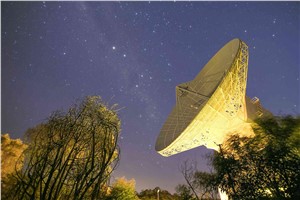 Talking with two voices at two different frequencies ensured the signals sent didn't interfere with each other.

The successful test is an important step in increasing the flexibility of ESA’s Estrack network of antennas across the globe, to find, control, or receive data from missions across space.

Deep space conversations
The vast majority of conversations between Earth and space involve one antenna on the ground, one spacecraft in orbit or out in the Solar System, and signals at a particular frequency going between the two.

In cases where several spacecraft are located in one part of the sky (all in orbit around Mars for example), it's possible for an antenna to ‘see’ all of these spacecraft at once.

As ESA ground stations have four receivers, they can in principle receive data from up to four spacecraft simultaneously.

This technique, called ‘Multiple Spacecraft Per Aperture’, or MSPA, is used routinely by ESA’s Estrack and NASA's Deep Space networks.

However MSPA only works one way. While it allows the ground station to receive data from multiple spacecraft, it can only ‘speak’ to one at a time.

That is until now.

Estrack gets chatty
Ground stations are built with two transmitters, pieces of equipment used to generate and transmit electromagnetic waves (light) carrying messages or signals. Normally, stations send signals using only one transmitter at a time, and the other is there as back up in case the first breaks down.

The recent test with the New Norcia ground station, the first of its kind, saw the deep dish use both transmitters at the same time to control Mars Express and ExoMars TGO.

Normally, these two Martian orbiters receive their command signals in very similar frequencies, known as the ‘X-band’, between 8–12 GHz, but from different stations or using one station at different times.

However, Mars Express can also receive signals in the ‘S-band’, at a frequency of approx 2.8 GHz, which until now has been saved for emergencies.

The perfect alignment of events; two spacecraft close in the sky, able to receive ‘telemetry’ signals at different wavelengths, and a deep space station able to send both ‘telecommand’ signals simultaneously, made it possible to combine ‘Multiple Spacecraft per Aperture’ with ‘Multiple Uplink per Aperture’ (MUPA), in an ESA first.

Why now?
Historically, there hasn't been a need to use one dish to command multiple simultaneous missions, as there wasn't such a demand on the antennas.

However, ESA's global network of antennas, Estrack, is running at peak capacity, meaning that the antennas can't fully serve the needs of all missions until the network capacity is increased.

Deep space missions have the added problem that they require large antennas, of which there are only three (for now) in the network, located in Australia, Argentina and Malargüe.

For many years, Mars Express was one of only three spacecraft orbiting Mars. Now, the Red Planet has seven such orbiters, operated by various space agencies, with more on the way.

ESA's control centre has a team dedicated to ensuring all missions get sufficient ground station time. By working out new ways of sharing ground stations, we allow more users to access current resources while new antennas are being built.