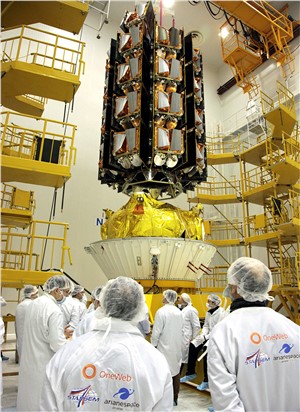 Preparations for Arianespace’s next Soyuz mission – to be conducted from Baikonur Cosmodrome in cooperation with the company’s Starsem affiliate – marked a new milestone as the payload of 34 OneWeb satellites and their dispenser were integrated on the launch vehicle’s Fregat upper stage.

Installed on their dispenser system, the OneWeb satellites are lowered for integration atop Soyuz’ Fregat upper stage at Baikonur Cosmodrome.

During activity in the Upper Composite Integration Facility (UCIF) at Baikonur Cosmodrome, the satellites and their dispenser system were installed atop Fregat – which is to perform two propulsive burns before deploying the spacecraft into a near polar orbit at an altitude of 450 km.

Scheduled for liftoff on February 6, Soyuz will deliver an estimated payload lift performance of 5,689 kg. This upcoming mission is designated Flight ST27 in Arianespace’s numbering system.

Another launch for OneWeb
Flight ST27 will be Arianespace’s second launch on behalf of the global satellite operator OneWeb – following the February 2019 Soyuz mission from French Guiana that successfully orbited the company’s initial six satellites.

OneWeb’s initial constellation is based on approximately 650 satellites and will scale to more than 900 as it grows to meet demand around the world. OneWeb Satellites – a joint venture between OneWeb and Airbus – is the prime contractor.

Flight ST27 is the first of eight Arianespace missions with Soyuz that may lift off in 2020 from the Baikonur and Vostochny Cosmodromes. This activity will complement the 12 opportunities identified from Europe’s Spaceport in French Guiana using Ariane 5, Soyuz and Vega; along with the maiden flights of Ariane 6 and Vega C.

Tell a friend:
Oneweb Satellites Receive Their "Kick" Ahead of the Soyuz Launch from Baikonour Cosmodrome