The E-Fan X Puts its Aerodynamic Design to the Test 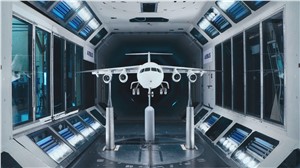 Wind tunnel testing is a critical milestone for any aircraft. For the E-Fan X, the test programme has offered invaluable insight into the hybrid-electric demonstrator’s aerodynamic design, low-speed performance and handling qualities in preparation for its first flight in 2021.

It’s an early July morning in Filton, UK, and a flurry of activity is underway at Airbus’ wind tunnel test centre. A scale model of a BAe 146 RJ100—a short-haul regional airliner originally designed in the 1980s—is being attached to the Filton wind tunnel in preparation for testing. In fact, it is the same wind tunnel model used in the certification of the original BAe 146 RJ100 aircraft.

But this test model is not exactly like the original.

“The BAe 146 RJ100 aircraft is not designed to have hybrid-electric systems on board. We’re trying to take something that exists and turn it into a hybrid-electric demonstrator.” Anna Calder, E-Fan X Overall Aircraft Design Engineer

The E-Fan X is Airbus’ hybrid-electric demonstrator. In the test aircraft based on the BAe 146 RJ100, one of the four jet engines will be replaced by a 2MW motor. Other modifications to the BAe 146 RJ100 include the addition of large, externally mounted heat exchangers for liquid cooling systems, as well as intakes and an exhaust for the fuselage-mounted power generation system.

If the E-Fan X is to embark on its first flight in 2021, engineers must understand how these modifications will impact the aircraft’s overall aerodynamic performance and handling qualities. And wind tunnel testing can provide invaluable insight in this respect.

During its testing, the E-Fan X was attached to the Filton low-speed wind tunnel, whose test section measures 3.65 x 3.05 metres. Giant fans expelled air at speeds of up to 216 mph. Small threads attached to the test model enabled engineers to analyse the movement of air from a variety of angles. At a 1:8 scale model, the E-Fan X was tested at a wingspan of over 3 metres.

“The E-Fan X is an aircraft demonstrator, so it’s not optimised for aerodynamic design,” says Oliver Family, Airbus Head of Overall Aircraft Design, E-Fan X. “But to fly the demonstrator safely and efficiently, the aerodynamics impacts need to be fully understood.”

A wealth of insight into aerodynamic design & handling
For Airbus engineers, the key takeaway from wind tunnel testing is a better understanding of the E-Fan X’s overall aerodynamic design. In addition, the test programme offered insight on all aspects relating to low-speed performance and handling qualities.

“The only change we discovered during the test programme is that we need to modify the porosity of some of the devices inside the ducts to ensure they relate correctly to the full-scale E-Fan X model devices,” says Paul Gingell, Airbus Wind Tunnel Test Engineer.

Successful completion of wind tunnel testing marks another key milestone in the E-Fan X’s development. Future milestones include flight tests for characterisation and installation of the 2MW motor on the test aircraft in 2020.

Tell a friend:
The E-Fan X Puts its Aerodynamic Design to the Test