Warming up for the Sun 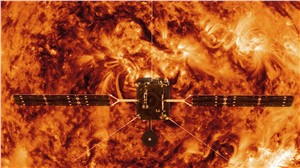 Today, the Solar Orbiter control team is simulating launch for the penultimate time, before the Sun-seeking spacecraft lifts-off for real.

After months of nerve-wracking simulation training, which has seen the control team play out a range of scenarios where something goes wrong, mission control is almost “green for launch”.

On 6 February (CET), Solar Orbiter will begin its loopy journey through space on the way to the Sun.

With the help of gravitational assists from Earth and Venus, and a series of chemical thruster burns, the spacecraft will reach a unique high-inclination orbit that will allow it to take the first pictures of the Sun’s poles.

Reaching this orbit, and safeguarding the spacecraft from the intense heat and radiation as it carries out its scientific mission, will require tricky operations back on Earth.

Simulating a boom!
To ensure Solar Orbiter’s safety as best they can, teams at ESA’s ESOC mission control are currently rehearsing the Launch and Early Orbit Phase (LEOP) of the craft’s mission, during which time the spacecraft ‘wakes up’ and solar panels and instrument booms are deployed.

This is a critical and risky part of the mission’s lifetime, and the teams will need to be prepared for every eventuality.
Play

No two missions flown from the Operations Centre are the same. Every mission brings with it a unique set of challenges that can be explored during simulations. For Solar Orbiter, during LEOP, the craft has to deploy a ‘boom’.

“The booms are deployed before all thrusters can be fired on the spacecraft, as some thrusters can potentially contaminate the instruments onboard,” explains Andrea Accomazzo, Flight Director for the mission.

“The sooner all thrusters can be fired, the more efficiently they can be used and more fuel can be saved”.

This makes the first few days after launch particularly time sensitive. While some thrusters are used immediately to control the spacecraft’s orientation, or ‘attitude’, if the boom fails to deploy on time, the craft could be more restricted in which thrusters to use without risk of contamination.

Fail to prepare and prepare to fail
LEOP simulations began on 10 September 2019 in which teams brainstormed boom deployment and other challenging events.

These could be anything that destabilises the control team, such as a team member suddenly becoming sick or a computer crashing, to critical errors that threaten the safety of the mission, such as a failure to establish communication with the spacecraft or a problem deploying its solar panels.

The final two simulations will see the control team – split into two, to provide round-the clock operations during the high-stress early days of the mission – run through a ‘nominal’ launch and early orbit, in which everything goes to plan. Today is the turn of the blue team, and on 23 January, the green team.

Finally, the dress rehearsal will take place on 31 January, during which time teams at mission control run through the launch sequence and test communication between mission control, the launch provider and of course, the satellite, just days before launch.

“The first few days of the mission are challenging and exciting! After our intense training in recent months, the team is hopefully ready to tackle any issue which may arise,” explains Sylvain Lodiot, Spacecraft Operations Manager for the mission.

“Fortunately, we have more than 100 years of combined experience flying space missions in our division, from the Rosetta landing, to BepiColombo and Venus Express. We’re now looking forward to seeing the Sun in a light no-one has before”.

Tell a friend:
Warming up for the Sun