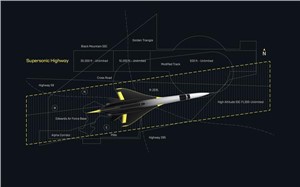 Boom Supersonic, the Colorado company building history’s fastest supersonic airliner, today announced the formation of a strategic partnership with Flight Research, Inc. (FRI) aimed at bringing test flights for XB-1, Boom’s supersonic demonstrator aircraft, to the supersonic corridor stretching across the Mojave Desert. As part of the partnership, FRI will provide Flight Test Support to Boom with a T-38 Talon, a two-seat, twin-jet supersonic trainer, for pilot proficiency training as well as a chase aircraft during XB-1’s flight test program.

Boom will also sub-lease a portion of the FRI Headquarters, building a custom state-of-the-art space to support XB-1, including a fully instrumented flight test control room and an XB-1 simulator room with cockpit and visual displays. The agreement includes use of one of several FRI hangars located at Mojave Air and Space Port beneath the supersonic corridor. This custom space gives Boom a presence at XB-1’s testing site and allows it to reassemble XB-1 after transport to Mojave and immediately begin testing.

“Flight Research provides essential equipment and superior facilities at the Mojave Air and Space Port, enabling us to finalize and fly XB-1,” said Boom founder and CEO, Blake Scholl. “We specifically selected the T-38 for our flight test program because of its similar flight characteristics and ability to chase XB-1 through low speed supersonic flight. This is an exciting time at Boom and we’re glad to have a partner in FRI to help us get to the finish line.”

“With Boom, we’re presented with an opportunity to partner with a dynamic and ground-breaking organization that is challenging conventional wisdom about flying,” said Scott Glaser, Senior Vice President of Operations at FRI. “This will be a new supersonic testing project for us, and we couldn’t be more excited to welcome Boom to this historic airfield and to outfit a space to meet their needs. We look forward to contributing to the return of supersonic commercial air travel.”