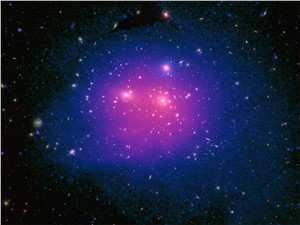 ESA’s XMM-Newton X-ray observatory has spied hot gas sloshing around within a galaxy cluster – a never-before-seen behaviour that may be driven by turbulent merger events.

Galaxy clusters are the largest systems in the Universe bound together by gravity. They contain hundreds to thousands of galaxies and large quantities of hot gas known as plasma, which reaches temperatures of around 50 million degrees and shines brightly in X-rays.

Very little is known about how this plasma moves, but exploring its motions may be key to understanding how galaxy clusters form, evolve and behave.

“We selected two nearby, massive, bright and well-observed galaxy clusters, Perseus and Coma, and mapped how their plasma moved – whether it was moving towards or away from us, its speed, and so on – for the first time,” says Jeremy Sanders of the Max Planck Institute for Extraterrestrial Physics in Garching, Germany, and lead author of the new study.

“We did this over large regions of sky: an area roughly the size of two full Moons for Perseus, and four for Coma. We really needed XMM-Newton for this, as it’d be extremely difficult to cover such large areas with any other spacecraft.”

Jeremy and colleagues found direct signs of plasma flowing, splashing and sloshing around within the Perseus galaxy cluster – one of the most massive known objects in the Universe, and the brightest cluster in the sky in terms of X-rays. While this kind of motion has been predicted theoretically, it had never been seen before in the cosmos.

By looking at simulations of how the plasma moved within the cluster, the researchers then explored what was causing the sloshing. They found it to be likely due to smaller sub-clusters of galaxies colliding and merging with the main cluster itself. These events are energetic enough to disrupt Perseus’ gravitational field and kickstart a sloshing motion that will last for many millions of years before settling.

Unlike Perseus, which is characterised by a main cluster and several smaller sub-structures, the Coma cluster contained no sloshing plasma, and appears to instead be a massive cluster made up of two major sub-clusters that are slowly merging together.

“This indicates that there are multiple streams of material within the Coma cluster that haven’t yet come together to form a single coherent ‘blob’, like we see with Perseus.”

The finding was made possible by a new calibration technique applied to XMM-Newton’s European Photon Imaging Camera (EPIC). The ingenious method, which involved mining two decades of archival EPIC data, improved the accuracy of the camera’s velocity measurements by a factor of over 3.5, raising XMM-Newton’s capabilities to a new level.

“The EPIC camera has an instrumental background signal – the so-called ‘fluorescent lines’ which are always present in our data, and can sometimes be annoying as they’re usually not what we’re looking for,” adds co-author Ciro Pinto, an ESA research fellow at the European Space Research and Technology Centre in Noordwijk, The Netherlands, who recently moved to Italy’s National Institute for Astrophysics.

“We decided to use these lines, which are a constant feature, to compare and align EPIC data from the past 20 years to better determine how the camera behaves, and then used this to correct for any instrumental variation or effects.”

This technique made it possible to map the gas in the clusters more accurately. Jeremy, Ciro and colleagues used the background lines to recognise and remove individual variations between observations, and then eliminated any subtler instrumental effects identified and flagged up by their 20 years of EPIC data mining.

EPIC comprises three CCD cameras designed to capture both low- and high-energy X-rays, and is one of a trio of advanced instruments aboard XMM-Newton.

Exploring the dynamic X-ray sky since its launch in 1999, XMM-Newton is the biggest scientific satellite ever built in Europe, and carries some of the most powerful telescope mirrors ever developed.

“High-energy astrophysics often entails comparing X-ray data at different points in the cosmos for everything from plasma to black holes, so the ability to minimise instrumental effects is key. By using past XMM-Newton observations to refine future ones, the new technique may open up inspiring opportunities for new research and discovery.”

These XMM-Newton observations will also remain unparalleled until the launch of ESA’s Advanced Telescope for High-ENergy Astrophysics (Athena) in 2031. Whereas covering such large areas of sky will largely be beyond the capabilities of telescopes such as the upcoming JAXA/NASA X-ray Imaging and Spectroscopy Mission, or XRISM, Athena will combine a large X-ray telescope with state-of-the-art scientific instruments to shed new light on the hot, energetic Universe.