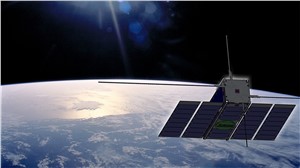 This coming Tuesday, ESA is launching the most powerful flight computer ever flown in space – inside a satellite smaller than a shoebox. The OPS-SAT nanosatellite will be the world’s first orbiting software laboratory, available to test novel methods of operating missions in actual space conditions.

OPS-SAT is ESA’s latest technology CubeSat – a small satellite based on standardised 10 cm boxes, much cheaper and quicker to build than traditional missions.

This mission is a ‘3-unit’ CubeSat, built up from three such boxes – but it is extremely capable despite its small size, equipped with an Earth-observing camera, a GPS sensor and startracker for navigation, reaction wheels for positioning, radio antennas and an optical data receiver and retro-reflectors, as well as a very powerful processor with 8 GB of mass memory.

“This low-cost mission works just like an extremely complex full-sized ESA satellite in terms of its ground interfaces. This will allow research teams from companies, research institutes or even school computer clubs to gain early space heritage for new technologies, demonstrating new ways of running space missions into the 2020s, when the overall population of satellites in orbit is set to grow exponentially.

“Two key elements of its design are flexibility and safety; OPS-SAT has a separate onboard computer ready to take over as needed if any experimental software goes wrong. The ground can then rapidly recover. The experiments will be run on a dedicated Linux-run payload computer – including powerful chips known as fully programmable gate arrays, or FPGAs which experimenters can reconfigure in orbit to perform complex tasks.”

OPS-SAT will be flying as an auxiliary passenger on Arianespace’s Soyuz flight from French Guiana at 09:54 CET (08:54 UTC, 05:54 local time) on 17 December, along with Italy’s COSMO-SkyMed Earth-observing satellite and ESA’s Cheops exoplanet-tracker, plus several other nanosatellites.

More than 130 teams have already expressed interest in making use of OPS-SAT. In another first for ESA, successful applicants will be given direct access to the CubeSat via the internet.

“Space is changing rapidly, and the way mission control works is changing too,” adds Rolf Densing, ESA’s Director of Operations. “Companies are planning hundreds or even thousands of satellites to accomplish a given mission, in the shape of new mega-constellations planned for low orbits. Individual satellites are going to have to get smarter and more autonomous.

OPS-SAT will also try out optical communications for cryptography experiments and a ‘spectrum analyser in the sky’ experiment for radio signal monitoring.

Experimental software will first be run on OPS-SAT’s ‘flatsat’ – a functional replica of the CubeSat – before being uploaded to orbit.

David Evans notes that actually operating their software in orbit will make all the difference to researchers: “Software does not operate in isolation but in combination with all the different mission systems, in the very different conditions of space – including weightlessness, vacuum, temperature extremes, cosmic ray impacts and occurrences of plasma.

“As space professionals know, it is impossible to verify your new application will work correctly in its target environment unless you fly it. So OPS-SAT is built to accelerate the innovation cycle and break down barriers to space, giving experimenters rapid access to space heritage that might otherwise take decades to gather.”

OPS-SAT was built for ESA by a consortium composed of partners from Austria, Poland, Germany and Demark led by TU Graz and Unitel IT Innovationen in Austria, supported through the FLY element of ESA’s General Support Technology Programme (GSTP), readying promising technologies for space.