Virgin Galactic places Main Oxidiser Tank into its next spaceship 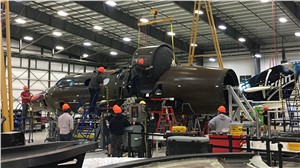 Virgin Galactic has completed a major milestone in the build of the next spaceship in its fleet. The team has placed the Main Oxidiser Tank (MOT) into the fuselage – moving this vehicle a step closer to beginning its flight test program.

During a spaceflight, the oxidiser in the MOT allows the solid fuel to burn. “To ignite the rocket motor and burn the fuel an oxidiser is needed,” explains Jose Stevens, Chief Engineer, Propulsion, at The Spaceship Company. “On Earth, most fuel burns using the plentiful supply of oxygen found in the atmosphere, but at very high altitudes and in space, the lack of oxygen means we have to bring an oxidiser along with us to allow the rocket motor fuel to burn and generate the required thrust.”

During the most recent Virgin Galactic spaceflight, the rocket motor burned for a duration of 60 seconds and created enough energy to propel our spaceship, VSS Unity, into space at almost three times the speed of sound.

The Virgin Galactic fleet is being built by its development and manufacturing arm, The Spaceship Company, in Mojave, CA. The team is building and assembling a fleet of spaceships and carrier aircraft for the Virgin Galactic operations in New Mexico. The first SpaceshipTwo, VSS Unity, is progressing through its flight test program with the next two vehicles in course of production.

Tell a friend:
Virgin Galactic places Main Oxidiser Tank into its next spaceship