A milestone mission for Ariane 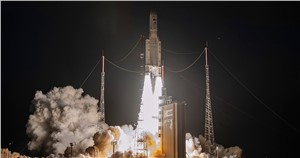 Arianespace delivered another dual-satellite payload to orbit on the 250th launch of an Ariane-series vehicle – underscoring its continued success 40 years after the historic maiden flight of an Ariane 1 version in 1979.

Lifting off today from Europe’s Spaceport in French Guiana, the Ariane 5 deployed TIBA-1 and Inmarsat GX5 to geostationary transfer orbit on a mission lasting 34 minutes from liftoff to final payload separation.

The Ariane 5 launcher – which is delivered to Arianespace by ArianeGroup as production prime contractor – provided an estimated total lift performance of 10,479 kg., including the satellites and hardware for their dual-payload deployment system.

Another Arianespace success for Egypt
Deployed first in the flight sequence 27 minutes after liftoff, TIBA-1 is a communications spacecraft for the Government of Egypt, developed by Thales Alenia Space and Airbus Defence and Space as co-prime contractors, with Thales Alenia Space acting as lead partner of the contract.

TIBA-1, the fourth satellite launched by Arianespace for Egypt, will operate from an orbital position at 35.5 deg. East. Airbus Defence and Space was Arianespace’s direct customer for the payload – continuing a strong partnership between the two companies that extends back to Arianespace’s creation in 1980.

Expanding the Global Xpress satellite network
Inmarsat GX5 was carried in Ariane 5’s lower payload position and released second in the sequence for today’s mission, which is designated Flight VA250 in Arianespace’s numbering protocol for its launcher families. To be located in geostationary orbit at 11 deg. East, this relay platform is the 10th satellite launched by Arianespace at the service of Inmarsat.

Produced by Thales Alenia Space, Inmarsat GX5 is a very high throughput communications satellite that will be fully integrated into Inmarsat’s current Global Xpress high-speed network – with a coverage area that is to include the Middle East, Europe and the Indian sub-continent.