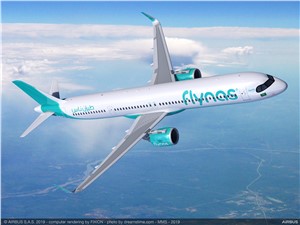 The A321XLR is the next evolutionary step from the A321LR which responds to market needs for even more range and payload, creating more value for the airlines. The aircraft will deliver an unprecedented Xtra Long Range of up to 4,700nm – with 30% lower fuel consumption per seat, compared with previous-generation competitor jets. At the end of October 2019, the A320neo Family had accumulated more than 7,000 firm orders from over 110 customers worldwide.