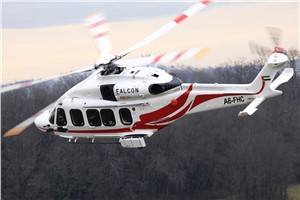 Falcon Aviation Services of Abu Dhabi (United Arab Emirates) announced that it has expanded its Leonardo AW189 helicopter fleet with the addition of a further two aircraft, of which one is leased from Milestone Aviation Group (“Milestone”), a GECAS company and the global leader in helicopter leasing.

The twin-engine medium-sized helicopter will arrive in Abu Dhabi, United Arab Emirates this month to support increasing demand for uplift in the offshore Oil and Gas sector. The AW189 will be able to carry up to 19 passengers and is equipped with air conditioning and an auxiliary power unit (APU), allowing for continuous air conditioning in both the cabin and the cockpit without having main engines running. The aircraft is being leased to Falcon Aviation by Milestone through an operating lease and represents the second helicopter lease transaction for Falcon Aviation.

“We are delighted to partner again with Milestone on this project, and we appreciate their support. We look forward to working with the Milestone team as a close partner in the years to come.” said Falcon Aviation’s Chief Operating Officer, Ramandeep Oberoi.

“We greatly appreciate Falcon Aviation’s continued trust towards Milestone’s ability to deliver and we are honoured to be given the opportunity to further expand on our already strong relationship with Falcon Aviation” said Milestone’s Head of Emerging Markets, Michael York. “Milestone already has three AW169s on lease to Falcon Aviation and the addition of this AW189 is testament to Falcon’s exceptional commitment in delivering to its customers as well as Milestone’s capability in offering significant added value and flexibility through its operating leases.”

With the addition of two more AW189s, Falcon Aviation becomes one of the largest AW189 commercial operators. Falcon Aviation’s combined fleet of AW169s and AW189s gives Falcon Aviation and its customer’s unmatched benefits in terms of comfort, safety and efficiency.