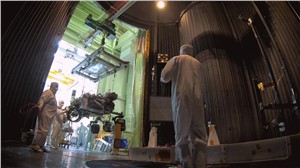 In this time-lapse video, taken on Oct. 9, 2019, at NASA's Jet Propulsion Laboratory in Pasadena, California, bunny-suited engineers move the Mars 2020 rover from a high bay in the Spacecraft Simulator Building into the facility's large vacuum chamber for testing in Mars-like environmental conditions.

"Whenever you move the rover, it is a big deal," said Mars 2020 engineer Chris Chatellier of NASA's Jet Propulsion Laboratory in Pasadena, California. "There is a technician on every corner, and other engineers and safety inspectors are monitoring and assisting every step of the way. Every move is choreographed, briefed and rehearsed."

After chamber testing, the 2020 rover was moved back to JPL's Spacecraft Assembly Facility where it is undergoing radio-emissions testing.

Tell a friend:
NASA's Mars 2020 Heads Into the Test Chamber