First sets purchased by one of world's largest commercial airlines; more sets in the pipeline 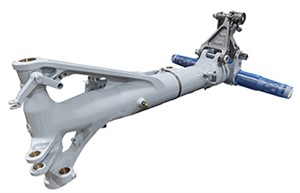 Leading component repair and overhaul provider Able Aerospace Services, a Textron Aviation Inc. company, has entered into the Boeing 737NG landing gear aftermarket support arena with the modification, upgrade and sale of its first B737-800 landing gear sets. The sale, which includes three inaugural landing gear sets, was made to a large commercial airline.

“Able’s track record in the commercial airline MRO market spans two decades and a wide range of services for Boeing and Airbus, including engine mounts, tracks, carriages and actuation assemblies,” said Michael Vercio, general manager at Able Aerospace Services. “Based on the size of the Boeing 737NG fleet, we anticipate a strong demand for aftermarket services on this aircraft and are putting our knowledge and resources to work to meet that demand – expanding our facility and refining our processes to service a platform that we expect to be a significant part of our future.”

Launched in 1993, the Boeing 737NG is one of the industry’s largest passenger fleets with nearly 7,000 aircraft in operation. Able’s new landing gear capabilities will serve commercial airlines, landing gear shops requiring outsource support, and select third-party suppliers. The company has just completed a 60,000-square-foot expansion, in large part to accommodate this effort.

During the next 12 to 24 months, the company is also planning the phased rollout of a comprehensive 737NG repair and overhaul service, as well as exchange options.

“Able is well-positioned to be a single source for landing gear repair and overhaul, combining our engineering, product development and repair teams to offer customers top-tier 737 support from a company they know and trust,” said Jeff Miller, regional sales manager at Able Aerospace Services and lead of the company’s fixed-wing business line. “That expertise, combined with our position as a Textron Aviation company, provides a solid foundation for our growth in the sector.”

All Boeing 737NG upgrades are completed out of Able’s 260,000-square-foot, state-of-the-art headquarters, where it provides more than 10,000 FAA-approved repairs, exchanges, specialized services and approved replacement parts for fixed- and rotor-wing customers, and a collaborative staff of more than 450 mechanics, engineers, DER experts, and sales and customer service specialists.