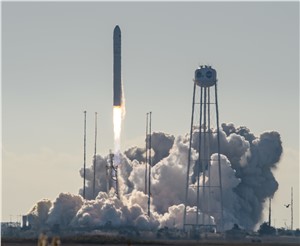 On the 19th anniversary of the arrival of the first crew to live aboard the International Space Station, a Northrop Grumman Cygnus resupply spacecraft is on its way to the orbiting outpost with almost 8,200 pounds of science investigations and cargo after launching at 9:59 a.m. EDT Saturday from NASA’s Wallops Flight Facility in Virginia.

The spacecraft launched on an Antares 230+ rocket from the Virginia Mid-Atlantic Regional Spaceport’s Pad 0A at Wallops and is scheduled to arrive at the space station around 4:10 a.m. Monday, Nov. 4. Coverage of the spacecraft’s approach and arrival will begin at 2:45 a.m. on NASA Television and the agency’s website.

Expedition 61 astronauts Jessica Meir and Christina Koch of NASA will use the space station’s robotic arm to capture Cygnus, and NASA’s Andrew Morgan will monitor telemetry. The spacecraft is scheduled to stay at the space station until January.

This delivery, Northrop Grumman’s 12th cargo flight to the space station and the first under its Commercial Resupply Services 2 contract with NASA, will support dozens of new and existing investigations.

Here are some of the scientific investigations Cygnus is delivering to the space station:

More Probing of Mysteries of the Universe
This mission carries components needed to prolong the operational life of Alpha Magnetic Spectrometer-02 (AMS-02). In a series of spacewalks planned in the coming weeks, astronauts will cut and reconnect fluid lines on the instrument, a feat not done before in space, which could prove valuable for future missions at NASA’s upcoming lunar Gateway for the Artemis program or missions to Mars.

Testing Personal Protective Equipment for Astronauts
The AstroRad Vest tests a special garment designed to protect astronauts from radiation caused by unpredictable solar particle events. Astronauts will provide input on the garment as they wear it while performing daily tasks. Use of the vest could protect crew members on missions to the Moon and Mars.

Food Fresh from the Oven
The Zero-G Oven examines heat transfer properties and the process of baking food in microgravity. It uses an oven designed specifically for use aboard the space station, and may have application on future long-duration missions by offering a way to increase variety in flavor and nutrition of food for crew members.

3D Printing with Recycled Materials
The Made in Space Recycler will test systems needed to reprocess plastic into 3D printing filament that can then be transferred for use to the Made in Space Manufacturing Device, a 3D printer that has operated on the orbiting laboratory since 2016. This has implications for space conservation and deep space missions.

These are just a few of the hundreds of investigations currently happening aboard the orbiting laboratory in the areas of biology and biotechnology, physical science, and Earth and space science. Advances in these areas will help to keep astronauts healthy during long-duration space travel and demonstrate technologies for future human and robotic exploration beyond low-Earth orbit to the Moon and Mars.

This mission, designated NG-12, will be in orbit at the same time as its predecessor, the NG-11 Cygnus spacecraft, which launched in April on an extended duration flight. The NG-12 Cygnus spacecraft will remain at the space station until January before it disposes of several thousand pounds of trash through its fiery reentry into Earth’s atmosphere. The ability to fly two vehicles at once further demonstrates the robustness of Cygnus to support the goals of NASA’s ambitious missions.

The Cygnus spacecraft for this space station resupply mission is named in honor of Alan Bean. The late NASA astronaut flew to the Moon on Apollo 12 and became the fourth human to walk on the lunar surface.

Saturday begins the 20th year of continuous human presence living off-planet aboard the International Space Station. NASA and its partners have successfully supported humans living in space since the Expedition 1 crew arrived Nov. 2, 2000. A truly global endeavor, the unique microgravity laboratory has hosted 239 people from 19 countries, more than 2,600 experiments from 3,900 researchers in 107 countries, and a variety of international and commercial spacecraft. The space station is facilitating the growth of a robust commercial market in low-Earth orbit for research, technology development, and crew and cargo transportation and remains the sole space-based proving ground and stepping stone for achieving the goals of the Artemis program, which will send the first woman and next man to land on the Moon in 2024.