Aircraft to Support the Regional Carrier's Fleet Expansion and Modernization 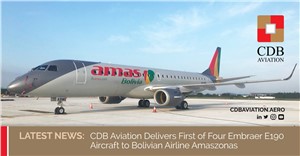 The Embraer regional jets, configured with 110 seats in a single class layout, will modernize the Amaszonas fleet, offering more than double the capacity. The E190s will serve the carrier’s growing route network, which connects its main hub at Santa Cruz de la Sierra’s Viru Viru Airport to domestic and international destinations. The airline will also operate the E190s at Montevideo’s Carrasco International Airport in the future. The three remaining jets are anticipated to join the carrier’s fleet between the end of October and early January 2020.

“We are pleased that Amaszonas has become part of our expanding customer base in the Americas,” said Luis Da Silva, CDB Aviation’s Head of Commercial, Americas. “We look forward to supporting the Amaszonas team, as they embark on the next phase of their fleet’s modernization. These first generation E190 jets will provide the needed additional capacity to enhance the carrier’s existing flight operations in Bolivia, while supporting the execution of its strategy focused on growing markets.”

Sergio de Urioste, CEO of the Amaszonas Group, commented: “Amaszonas has chosen the most appropriate type of aircraft for its orderly expansion model, which is the Embraer E190, and CDB Aviation provides us with the alliance tool we have sought to incorporate these aircraft. After 20 years of work of Amaszonas in Bolivia, we are evolving in all our markets to offer a better service of comfort, modernity, and technology.”

"With the Americas aviation market bound to accelerate and the robust fleet replacement plans of its airlines, CDB Aviation sees tremendous opportunities in the region,” CDB Aviation President and Chief Commercial Officer Patrick Hannigan. “We've built a strong footprint in the Americas, putting in a team with deep airline relationships equipped to serve our airline partners’ evolving needs. We expect to continue expanding our market footprint in keeping up with forecasted growth."