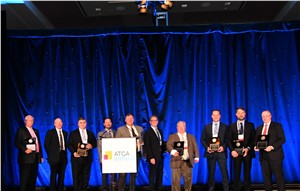 Contracted by the U.S. Air Force through the Department of Transportation's Volpe Center, GBDAA SkyVision, the only mobile beyond visual line-of-sight system certified by the Federal Aviation Administration to provide drone operators with real-time aircraft display data, satisfying a key "see and avoid" requirement.

The system is now operational in Ohio at the Springfield-Beckley Municipal Airport and will be used to test the safety and efficiency of small drone operations in the 200-square-mile drone test range.

"Much like the early days of manned flight, I think we are in a 'golden age' of rapid technological advancement, which today supports amazing new capabilities for unmanned aircraft systems," said Art Huber, Air Force Research Lab deputy director of operations. "In this vein, we see the SkyVision system as a remarkable achievement on the road to full integration of remotely piloted aircraft in the National Airspace System."

Tell a friend:
GBDAA SkyVision Team Recognized for Advances in Safe Integration of Drones Into the National Airspace System