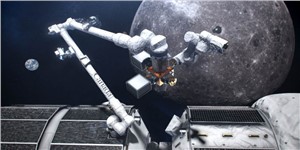 MDA, a Maxar company (NYSE: MAXR; TSX: MAXR), has been awarded two contracts from the Canadian Space Agency for work on Phase A of the Gateway External Robotic Interfaces project.

The Gateway External Robotic Interfaces will act as critical touch points for the eXploration Large Arm (XLA) and the eXploration Dexterous Arm (XDA), the major robotic manipulator elements that form Canadarm3, the artificial intelligence-enabled robotic system that will service the Gateway. The Gateway External Robotic Interfaces will be the standardized connection points between the external robotics on the Gateway and its modules, visiting spacecraft, payloads and replacement units.

“MDA is proud to continue our legacy of working with the Canadian Space Agency and its international partners to design, build and deploy robotic systems in support of space exploration missions,” said Mike Greenley, group president of MDA. “This project will leverage MDA’s world-leading space robotics capabilities, gained through the Canadarm programs, and will be an important component of Canada’s contribution to the NASA-led Gateway. We are proud to deliver new jobs in Canada and engage our Canadian supply base in preparation for Canadarm3.”

On Phase A of the Gateway External Robotic Interfaces project, MDA will work with the Canadian Space Agency to develop the interface and system requirements and undertake concept and technology development activities necessary to provide the Gateway module and element developers with information to support the integration of the external robotics and its interfaces.

The Government of Canada announced its commitment to the Gateway to enable future exploration missions, including human lunar landings. Similar to the robotics provided by Canada on the International Space Station, Canadarm3 will provide Extra-Vehicular Robotics (EVR) services to the Gateway including external logistics, maintenance, inspection, assembly and reconfiguration, and support to external science payloads.

Since the first deployment of Canadarm in 1981, MDA, working with the Canadian government, has led the design and development of Canada’s primary contribution – robotics – to space exploration missions through the US Space Shuttle and International Space Station programs. Canadarm flew on over 90 shuttle missions, and Canadarm2 and Dextre have been in operation on the International Space Station for more than 18 years.

As a leader in delivering space infrastructure to explore and advance the use of space, Maxar is playing a key role in NASA’s Artemis program to return astronauts to the Moon by 2024 and enable future missions to Mars. Maxar will build and fly the first element of the NASA-led Gateway, called the Power and Propulsion Element. Maxar will also provide a robotic arm called SAMPLR, which is intended to be part of a future payload delivery to the lunar surface under NASA’s Commercial Lunar Payload Services contract. SAMPLR will be the first robotic arm on the surface of the Moon since the Surveyor missions more than 50 years ago.