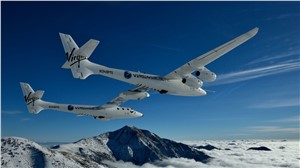 New Mexico is on track to become one of the very few places on this beautiful planet which regularly launches humans to space.

We made the decision to move spaceline operations to Spaceport America after two successful spaceflights, which also created five new commercial astronauts. The most recent spaceflight in February saw Chief Astronaut Instructor, Beth Moses, become the first commercial astronaut to unstrap and float free in the cabin of a commercial spaceship.

This week, the mothership left The Spaceship Company headquarters in Mojave, California, piloted by Kelly Latimer and myself. In the vicinity of Spaceport we carried out a number of tests of the communications systems, and coordination with the FAA at Albuquerque Center, White Sands Missile Range, Holloman AFB and NMSA, before landing at Spaceport. VMS Eve has become the first Virgin Galactic flight vehicle to permanently call the Land of Enchantment its home.

The team has been busy getting Spaceport America ready for commercial service, installing the ground infrastructure and then conducting ground tests of all the systems to ensure they are flight-ready. The arrival of VMS Eve in New Mexico signifies the start of the next important phase – mothership operations prior to SpaceShipTwo’s own flight operations.

In the coming days, the team will use VMS Eve to fly simulated spaceship launch missions, with pilots and Mission Control ensuring that all in-flight communications and airspace coordination work as planned. The pilots will replicate some of SpaceShipTwo’s low altitude flight profile and familiarize themselves with the New Mexico airspace and landmarks.

VMS Eve will return to Mojave later this year to pick up Spaceship Unity.  When both vehicles are in place in New Mexico, we will continue Unity’s flight test program.  Following the completion of that program, we will move to the start of commercial service and begin flying our future astronauts into space.

The other exciting development is the unveiling of Spaceport America later this week. For the first time we have started operating out of Spaceport, using our newly designed operational areas including Mission Control and Flight Briefing Rooms.