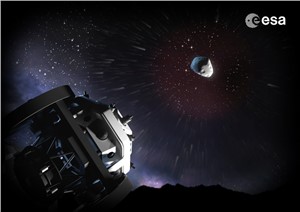 On 25 July, an asteroid the size of a football field flew by Earth, coming within 65 000 km of our planet’s surface during its closest approach – about one fifth of the distance to the Moon.

The 100 m-wide asteroid dubbed '2019 OK' was detected just days before it passed Earth, although archival records from sky surveys show it had previously been observed but wasn't recognised as a near-Earth asteroid.

While 2019 OK illustrates the need for even more eyes on the sky, it also provides an opportunity to improve the asteroid recognising abilities of current and future telescopes, including ESA's upcoming 'Flyeye'.

ESA observed the asteroid just before its flyby, by requesting two separate telescopes in the International Scientific Optical Network (ISON) take images of the space rock.

One of these is shown here, revealing the asteroid – the dark blob at the centre of the image – move across a background of stars, which appear as faint streaks.

With these observations, asteroid experts at ESA were able to extract precise measurements of the position and movement of the rocky body.

“With the ISON observations we were able to determine the distance of the close approach incredibly accurately,” explains Marco Micheli from ESA’s Near-Earth Object Coordination Centre.

“In fact, with a combination of observations from across the globe, the distance is now known to better than one kilometre!”

The asteroid was first discovered by the Southern Observatory for Near-Earth Asteroids Research (SONEAR) just a day before its close approach.

Observations of 2019 OK were independently confirmed by other observatories, including the Arecibo radar in Puerto Rico and a third telescope in the ISON network.

Since the discovery, with knowledge of where the asteroid would have been and by searching for it by eye, existing images were found in the Pan-STARRS and ATLAS sky survey archives.

Both surveys had in fact captured the asteroid in the weeks before the flyby, but this slow space rock appeared to move just a tiny amount between images, and was therefore not recognised.

"This 'un-recognition' of an asteroid, despite it being photographed," explains Rüdiger Jehn, ESA's Head of Planetary Defence, "will be used to test the software going into ESA's upcoming asteroid-hunting telescope, the Flyeye."

More eyes on the sky
We know of, and are tracking, thousands of asteroids in the Solar System, so why was this one discovered so late? Unfortunately, there is currently no single obvious reason, apart from its slow motion in the sky before close approach.

2019 OK also travels in a highly elliptical orbit, taking it from within the orbit of Venus to well beyond that of Mars. This means the time it spends near Earth and is detectable with current telescope capabilities is relatively short.

ESA, NASA and other agencies and organisations around the globe – professional and amateur – discover new asteroids every day. This work constantly increases our understanding of the number, distribution and movement of orbiting rocky bodies.

Asteroids the size of 2019 OK size are relatively common in the Solar System, but hit Earth on average only every 100 000 years. Travelling in a highly elliptical orbit that takes it within the orbit of Venus, this asteroid wont come close to Earth again for atleast 200 years.

The Agency’s Hera mission – currently being designed to test asteroid deflection for the first time – will develop our capacity to knock asteroids off a dangerous path.