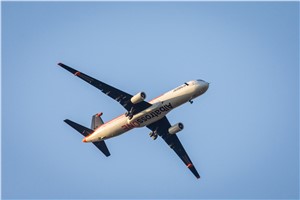 Of all feathered creatures, the albatross enjoys a legendary status. To bird enthusiasts, it is a majestic animal with the largest wingspan of any living bird. To golfers, it is a score of three-under-par on a single hole. To poetry majors, it is a centuries-old metaphor for a curse or burden. And to many engineers, the albatross is synonymous with the next generation of aircraft wings.

It is not hard to see why the albatross has captured the imagination of engineers: this remarkable sea bird can soar for several hundred kilometres—without flapping its wings! No other bird or winged creature is capable of doing the same. The secret of the albatross’ flight techniques lies in its capacity to “lock” its wing at the shoulder when travelling over long distances. In fact, the albatross can spend up to half of its time facing the wind and using it to fly upward on long trips, thereby covering long distances with very little effort. On the other hand, when faced with wind gusts, the albatross can quickly unlock its wings to better navigate the sudden, brief increase in wind speed.

This flight technique is known as “dynamic soaring,” or repeatedly crossing the boundary between air masses of different velocity to gain energy. Although a variety of sea birds often use this technique, too, the albatross has mastered it for maximum efficiency.

AlbatrossOne is the first aircraft to trial in-flight, freely flapping wing-tips—which account for up to a third of the length of the wing. Tom Wilson, Airbus engineer, Filton, UK

Semi-aeroelastic hinged wing-tips for greater efficiency
Taking inspiration from the albatross, Airbus engineers in Filton, UK, with the support of Airbus ProtoSpace, have developed AlbatrossOne, a small-scale, remote-controlled aircraft demonstrator that has “semi-aeroelastic” hinged wing-tips. “The concept of hinged wing-tips is not new,” explains Airbus engineer Tom Wilson. “Military jets employ them to allow greater storage capacity on aircraft carriers. However, AlbatrossOne is the first aircraft to trial in-flight, freely flapping wing-tips—which account for up to a third of the length of the wing.”

In comparison to freely flapping wing-tips, a conventional wing on an aircraft transmits huge loads to the fuselage during turbulence. This requires the base of the wing to be heavily strengthened, thus adding weight to the aircraft as a result of the heavily reinforced wing boxes. By allowing the wing-tips to react and flex to wind gusts, load is significantly reduced. At the same time, the technique can reduce drag and combat the effects of turbulence and wind gusts.

Inspiration from nature to revolutionise aircraft wing design
Revolutionising aircraft wing design is one of the objectives of AlbatrossOne—a project that draws on inspiration from the albatross’ flight techniques. The demonstrator aircraft, which is a small-scale version based on the A321 aircraft, is constructed from carbon-fibre and glass-fibre-reinforced polymers, as well as components from additive manufacturing.

The first flight tests were concluded in February after a 20-month development programme. The next step for AlbatrossOne is to conduct further flight tests that combine the two flight modes, enabling the wing-tips to unlock during flight and to examine the transition.

Tell a friend:
The Albatross is Inspiring Tomorrows Aircraft Wings