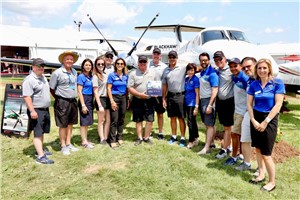 Pratt & Whitney, a division of United Technologies Corp. (NYSE: UTX), today announced that it has signed a 10-year agreement for the sale of new PT6A engines to Blackhawk Modifications Inc., for all of its conversion programs.

“Blackhawk has earned a rock-solid reputation for providing value-added conversion solutions to its customers,” said Irene Makris, vice president, Sales and Marketing at Pratt & Whitney. “This agreement is a testament to our successful relationship and mutual commitment to excellence and innovation. We have delivered more than 1,500 PT6A engines to Blackhawk over a 20 year period. We are proud that Blackhawk has made the PT6A their engine of choice.”

“We know the success of our customers rides on our ability to drive innovative and proven technology into everything we do. The PT6A is one of the most versatile engines in the industry and as we continuously enhance the engine we do so in a way that they can be seamlessly used to upgrade the engines on existing aircraft,” said Makris. “While the new engines have the same digital technology and dimensional profile as previous models they offer more power and better fuel efficiency.”

More than 48,800 PT6A engines have been manufactured and the entire PT6A engine family has flown more than 400,000,000 hours. The PT6A is the proven choice for demanding, high-cycle/high-power applications in single- and twin-engine aircraft for all kinds of missions and applications.