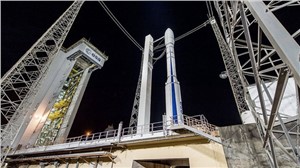 Arianespace announced today, 11 July, 2019, the failure of Flight VV15 carrying the FalconEye1 satellite. This was the first Vega failure after 14 successful launches in a row since being introduced at the Guiana Space Center in French Guiana in 2012.

The Vega launch vehicle lifted off as scheduled on July 10, 2019 at 10:53 pm (local time in French Guiana). Approximately two minutes after the Vega launcher’s liftoff, shortly after ignition of the second stage (Zefiro 23), a launcher anomaly occurred – leading to the premature end of the mission.

The European Space Agency (ESA) and Arianespace immediately decided to appoint an independent inquiry commission. This commission is tasked with analysing the reasons for the failure and defining the measures needed to ensure the resumption of Vega flights while fulfilling all requisite safety and security conditions. The inquiry commission is co-chaired by the Inspector General of ESA and the Senior Vice President, Technical and Quality of Arianespace.

Preparations for the next Ariane 5 launch are continuing at the Guiana Space Centre, Europe's Spaceport.