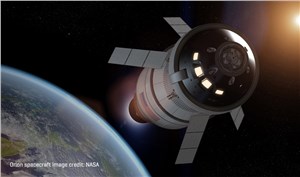 Orion is NASA’s first spacecraft designed for long-duration, deep-space exploration by humans. Harris was selected by Lockheed Martin, the prime contractor for Orion, to deliver the audio system for Exploration Mission-2, the first crewed flight for the Orion spacecraft.

The system, which will enable astronauts to communicate with each other and NASA, will feature audio control units (ACU), audio interface units (AIU) and a speaker unit (SPU). The ACU provides central audio control and signal processing; the AIU is the push to talk interface clipped to the spacesuit or shirt sleeve; and the SPU transmits voice communications, as well as caution and warning alarm tones, in the cabin.

“The Harris-built audio system will be a crucial communications tool for astronauts on board this and future Orion missions, such as flights to Mars and beyond,” said Murali Krishnan, vice president and general manager, Intelligence, Surveillance and Reconnaissance, Harris Space and Intelligence Systems. “Being a part of NASA’s Orion program positions Harris for future crewed space flight work, as the U.S. government continues to deepen its commitment to space exploration.”

Harris’ Space and Intelligence business designs, manufactures, and integrates systems for Earth and space observation and for satellite communications. The company’s technology has been onboard every manned U.S. space mission.