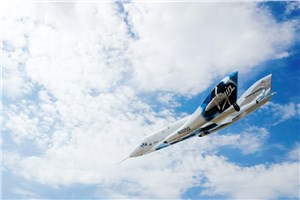 It was a beautiful summer’s morning  here in Mojave today and a great day for flying!

During the couple of months since VSS Unity’s last flight, our teams have been focusing their efforts on a long list of ground-based test and installation activities. With those successfully completed, it was time to get VSS Unity back into her natural environment. So, after an early start for the team, VMS Eve and VSS Unity took gracefully to the skies again today, at 8:58AM local time.

This was Unity’s sixth glide test and essentially a dry run for rocket-powered flights.  VMS Eve was piloted by Nicola Pecile and Mike Masucci with flight test engineer Dustin Mosher. Pilots Dave Mackay and CJ Sturckow were at Unity’s controls with a test card which kept them fully occupied as we expanded the speed and load envelope, put the vehicle into the feathered reentry configuration, and evaluated flying with an increased weight and rearward shift in the center-of-gravity for landing.

Our major first today though was that with the exception of the rocket motor fuel grain, called the CTN (Case-Throat-Nozzle), we flew with all the spaceship’s principle propulsion components on-board and live.  This meant that Unity took off with her forward pressurant tank loaded with helium and for the first time, her centrally positioned Main Oxidizer Tank fully charged with nitrous oxide. In a repeat of the last flight, Unity also carried a ballast tank in the rear fuselage filled with 1000 lbs of water to simulate the weight and positioning of the CTN.

As planned, the pilots tested the venting of the nitrous tank while still mounted on the carrier aircraft.  The procedure proceeded smoothly, as Eve and Unity climbed past 40,000 feet and approached the drop point. After a clean separation from Eve and an approach-to-stall test, Unity’s tail-booms were raised into their re-entry position for the second time in flight. Once back into the normal glide configuration, the pilots used the descent to execute the remaining test points, including a high-g pull-up maneuver and bank-to-bank rolls. Unlike the previous glide test, the water ballast in the rear tank was not jettisoned, allowing us to test the spaceship’s  performance with a heavier landing weight and a center-of-gravity towards the back of the vehicle.

Chief pilot David Mackay shared his initial impressions: “We are really pleased with what we saw today. We collected hundreds of gigabytes of data for us to review, and from the pilots’ point of view, it felt really wonderful. All of you here at Virgin Galactic and The Spaceship Company should be very proud: VSS Unity is a great spaceship!”

Lots of data to examine now, but a great day’s work and an important step towards powered flights. Congratulations to our pilots, the propulsion team, ground crew, mission control, and of course to Eve and Unity!