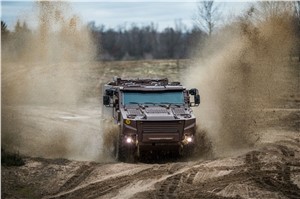 Nexter, Thales and Arquus met annual delivery milestones for 2022 in line with the provisions of the 2019-2025 Military Programming Law. Since 2019, the French defence procurement agency (DGA) has taken delivery of a total of 452 GRIFFON and 38 JAGUAR vehicles. The EBMR1 consortium has also developed a new field ambulance version of the GRIFFON, the GRIFFON SAN. The new medevac version was qualified by the DGA on 12 September 2022. It includes a medical module, provisions for medical equipment integration and stowage and a patient support system with an adjustable table and stretcher lift. The interior is configured to accommodate patients seated or lying down, with room for four stretchers. The SAN version includes all the common features and functions (mobility, weapon systems, protection and connectivity) of the GRIFFON family.

Energy innovation
In June 2022, the consortium members also jointly submitted the results of a derisking study on the use of lithium-ion batteries in military vehicles. Trials were conducted on a vehicle mock-up and on a GRIFFON prototype to enable DGA Techniques Terrestres (the DGA's land forces centre of expertise) and the consortium to test the whole system. In the future, these new batteries could power larger numbers of electrical devices with the same stand-by time as existing batteries and half the charging time. The consortium's study opens up new opportunities for equipping the most energy-hungry vehicles in the theatre of operations.

SCORPION, an ambitious programme
The JAGUAR armoured reconnaissance and combat vehicle (EBRC2) and the GRIFFON multi-role armoured vehicle (VBMR3) were developed under the SCORPION programme led by the DGA, alongside the SERVAL light multi-role armoured vehicles. They are natively designed for the SCORPION combat information system (SICS4), enabling land forces to conduct collaborative combat operations, with real-time communications between deployed units and other digitalised battlefield solutions to ensure that the French Army would stay one step ahead of the adversary in a high-intensity conflict situation.

The first SCORPION combined arms brigade will be formed at the end of 2023 to deploy these new combat capabilities.

The JAGUAR is a 25-tonne armoured reconnaissance and combat vehicle armed with a 40 mm cannon with telescoped munitions (CTA) and the MMP missile.

The vehicle is unique in several respects:

The GRIFFON is a 24-tonne multi-role armoured vehicle, available in numerous versions, including troop transport, command post, communications relay, artillery observation and 120 mm mortar (MEPAC). Deployed by the French Army in the Sahel in 2021, the GRIFFON is recognised for its operational performance, high mobility and ease of maintenance. It includes the common systems developed for the other SCORPION vehicles, such as the vetronics, the SICS combat information system and the Hornet remote weapon station.
?