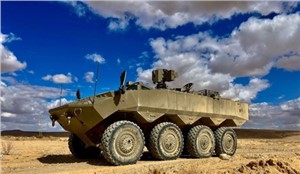 As part of this contract, valued at over $100 million, Oshkosh Defense will build hundreds of Eitan APC main hulls.

MCWS: In June 2021, Oshkosh Defense was awarded a $942.9M contract to integrate a 30mm Medium Caliber Weapon System (MCWS) onto the Stryker Double V Hull Infantry Carrier Vehicle (ICVVA1).  This upgrade will provide precision lethality capability to the Army’s Stryker Brigade Combat Team (SBCT).
OMFV: In July 2021, the U.S. Army selected Oshkosh Defense to participate in the Optionally Manned Fighting Vehicle (OMFV) Concept Design Phase 2 contract. In November 2022, Oshkosh submitted its proposal for Phase 3 Detail Design and Phase 4: Prototype Build and Test of the OMFV program. A down select of up to three awards is expected to occur in the second quarter of 2023.

“We are honored to have been selected by the Israeli Ministry of Defense to build the Eitan APC hull,” said John Lazar, Vice President of International, Oshkosh Defense. “We’ve worked with IMOD on a multitude of programs for more than a decade, and we look forward to demonstrating our continued commitment to this partnership.”

Production will begin in 2023 and the first hulls will arrive in Israel within 18 months.