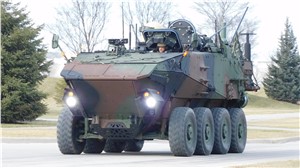 “We are proud to have delivered this transformational capability to the Marine Corps,” said Gordon Stein, General Dynamics Land Systems Vice President and General Manager of U.S. Operations. “Our purpose-built ARV prototype is the fruition of several years of research and development internally and in collaboration with the USMC. We can’t wait for Marines to get their hands on this ARV and use it as their quarterback on the multi-domain battlefield.”

Along with the ARV prototype, General Dynamics Land Systems today also delivered a blast hull for survivability testing and a system integration lab.

“We have continued to align with the Marine Corps’ 10-year transformational initiative, Force Design 2030, and our ARV capability furthers that objective,” said Phil Skuta, General Dynamics Land Systems director of strategy and business development for U.S. Marine Corps and Navy programs. “The ARV is highly mobile on land and in the water and will allow Marines to sense and communicate like never before. Our design also ensures growth margins and modular open architecture to rapidly incorporate new technology as it develops.”