UK Military Support for Ukraine Continues With Delivery of C

This news is classified in: Defense EOD / IEDs / Mines 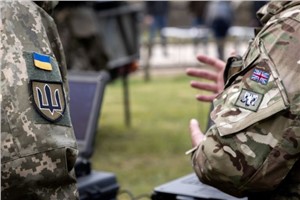 The deliveries are the latest in a continuous supply of support that the UK has been providing Ukraine throughout 2022 and which will continue in 2023. The UK has also recently provided a significant package of air defence systems, including more than 1,000 air anti-air missiles and 125 anti-aircraft guns, to defend Ukraine against Russian strikes on its cities and infrastructure.

The UK was the first country in Europe to send military aid to Ukraine, sending thousands of NLAW anti-tank missiles early in 2022. Since then, the RAF has flown over 240 flights to move thousands of tonnes of military aid from the UK and international partners, ranging from sophisticated missiles to clothing to support troops through the harsh winter.  The UK continues to liaise with the government of Ukraine to ensure that future supplies meet the tactical demands of the conflict as it evolves.

The Defence Secretary, Rt Hon Ben Wallace MP, said:
"Russia’s use of landmines and targeting of civilian infrastructure underline the shocking cruelty of Putin’s invasion. This latest package of UK support will help Ukraine safely clear land and buildings as it reclaims its rightful territory."

In addition to providing equipment, UK armed forces have trained thousands of personnel from the Armed Forces of Ukraine (AFU). A major training programme began in the UK in June, with UK personnel working alongside international partners to train new recruits in the basics of combat. Specialist training has also been conducted on equipment donated to Ukraine. In total, more than 11,000 AFU personnel were trained in the UK in 2022. This support is set to continue in the new year – with the support of international partners, the infantry training programme now aims to train up to 20,000 AFU personnel in 2023.

VALLON can help troops breach minefields and clear safe routes on roads and paths. It can also help ensure that civilian infrastructure and houses are clear of explosive hazards, allowing people to safely return to their homes. The bomb de-arming kits, meanwhile, are designed to de-arm the fuze from unexploded Russian bombs, munitions, and improvised explosive devices. This counter explosive ordnance equipment is some of the latest in a wide range of equipment which the UK has donated to Ukraine to support its fight against Russia’s illegal invasion.

Helping to defend against attacks from the air, the UK has supplied Ukraine with Stormer vehicles and thousands of anti-air missiles including Starsteak and Advanced Medium Range Anti-Air Missiles (AMRAAM). Visiting Kyiv in November, the Prime Minister announced a new air defence package including 125 anti-aircraft guns as well as radars and anti-drone technology, helping defend Ukraine from Russian attacks against its infrastructure.

On the ground, Multiple-Launch Rocket Systems (MLRS) have allowed the AFU to strike targets with precision from up to 80km away, helping to push back Russian forces and counter their use of long-range artillery. The Ministry of Defence has also supplied dozens of M109 155mm self-propelled guns and L119 105mm light guns, along with over 100,000 rounds of artillery ammunition and millions of rounds of small arms ammunition.

This weaponry has been supported by more than 200 armoured vehicle and 100 logistics vehicles to help the AFU move troops and equipment around the battlefield, as well as Sea King helicopters to support search and rescue.

In addition to direct deliveries of military aid, the UK has established the International Fund for Ukraine, which uses contributions from international partners to rapidly procure priority military materiel.

In total, the UK provided £2.3bn of military aid to Ukraine in 2022 – more than any other nation except the United States – and the government has committed to sustain the same level of funding in 2023.