Evolving Time-tested Technology to Outmatch Hypersonic Weapons Inside the Atmosphere 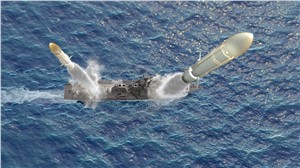 When it comes to defending against hypersonic weapons that move and maneuver at more than five times the speed of sound, you need layers of defense and multiple opportunities to take out the threat.

Seeking the first missile specifically designed to defeat hypersonic threats in their most vulnerable phase of flight, the glide phase, the MDA selected Raytheon Missiles & Defense, or RMD, a business of Raytheon Technologies, as one of the companies to develop the Glide Phase Interceptor, or GPI.

Recently, the company reached a milestone in its GPI program when it completed the Systems Requirements Review – Prototype. That review confirmed that RMD and the government agency have a shared understanding of the interceptor’s requirements and allows further design maturation.

And, in developing this new offering, the company is drawing on decades of experience producing the world’s most trusted group of naval interceptors: the long-proven Standard Missile family.

New capability for layered defense
When the Glide Phase Interceptor is launched from a ship to intercept lower-altitude hypersonic missiles in their glide phase of flight, it will cover an extra layer of defense alongside RMD’s longtime Standard Missile, or SM, family.

Thus, GPI will bridge the crucial gap between SM-3, which destroys incoming missiles outside Earth's atmosphere, and SM-6, which hits targets in the terminal phase of flight.

A hypersonic missile goes into its glide phase when it re-enters the atmosphere and continues toward its target.

“GPI will be the first effector to operate against hypersonic threats in that phase,” said Patrick Hollen, who works on both RMD’s GPI and SM-3 programs. He added that “it also enhances layered defense and enables more opportunities to intercept a hostile hypersonic threat farther from its target.”

Benefits of experience
The hypersonic threat poses significant challenges. But, when RMD set about designing its Glide Phase Interceptor, the team did not have to start from scratch: The company has some 70 years in air and missile defense. So, today, it is harnessing its certified Standard Missile technology for GPI’s hypersonic mission—enabling a rapid timeline by integrating proven components and systems, among other strategies.

“Our adversaries are already fielding hypersonic missiles, so the time to act is now,” said Julie Leeman, RMD’s GPI program director. “We have the technology today to be able to do this, and we have the ability to upgrade as the threat evolves and as technology evolves.”

The company recently delivered its 500th Standard Missile and variants have been used in dozens of intercepts. To underscore the advantages of that successful track record, Hollen used this analogy: “If you've never built a car before and you don't understand how the steering wheel connects with the wheels, you have to figure that out. But we've had that figured out for years. And we've already trained the mechanics on how to fix that car.”

Utilizing technology from Standard Missile allows RMD to spend more time reducing risk and refining the design for GPI’s evolving, critical technologies. “We're leveraging as much as we possibly can from our prior and current SM programs, so we can focus on the aspects that are unique to GPI,” Leeman said.

Plus, the team is drawing on digital technologies—models, requirements derivations, test workbooks, software and simulations—to help design the new interceptor. “As we build GPI, we're doing it in a digital way that links its systems,” Leeman said. “A great example of how that's propelling our work was when we got a new version of the MDA’s requirements, we were able to implement that in our systems by the push of a button. That propels our GPI program.”

Integration and the human factor
In its requirements for GPI development, the MDA has stipulated that “any prototypes designed will fit into the current Aegis Ballistic Missile Defense system” which fires from a naval vessel’s vertical launching system.

Here, again, RMD has a key advantage: Its capabilities have been integrated with that system for 18 years. “Our Standard Missiles and Aegis are already tightly coupled,” Leeman said. “They talk to each other; they exchange messages with each other. We’re able to tweak and reuse a lot of that interface for GPI.”

But there’s more than interceptor technology and systems at stake in a successful ship-based launch. There’s also the safety of those on board.

“Shipboard qualification and the ship environment are unique because the ship carries human life,” Leeman said. “So, safety boards and the qualification process are very involved, very rigorous … to protect everyone on the ship. We’re now bringing that commitment to the development of the new Glide Phase Interceptor.”

Tell a friend:
Evolving Time-tested Technology to Outmatch Hypersonic Weapons Inside the Atmosphere