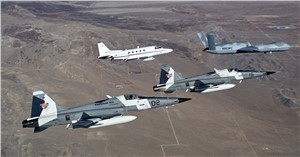 All live aircraft had operational next-generation Tactical Infrared Search and Track (TacIRST™) sensors during the test to provide Air-to-Air Moving Target Tracking. These live tracks were provided by Lockheed Martin’s TacIRST sensor and was processed on a General Dynamics Mission Systems’ EMC2 Multi-Function Processor (MFP), commonly referred to as “the Einstein Box.” Using this software-defined architecture, the flight demonstrated crewed and uncrewed teaming between the MQ-20s, Sabreliner and manned F-5 AT tactical fighters.

“Flying four platforms with TacIRST installed was a major milestone for Lockheed Martin,” stated Matthew Merluzzi, Sr. Program Manager at Lockheed Martin. “By leveraging open mission systems, our team has demonstrated that common platform integration is possible across a variety of vehicles bringing advanced capabilities to our warfighters quicker and more affordably.”

This is another in an ongoing series of autonomous flights performed using internal research and development (IRAD) funding to prove out important concepts for ACPs.