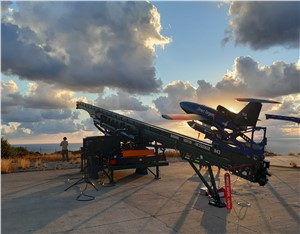 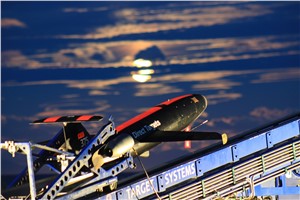 For more than 20 years, Air Defenders around the world have been training with Airbus Defence and Space target drones - ensuring that their countries' air defences work when it counts. Airbus' Target Systems & Services has now produced its 2,000th drone in Friedrichshafen.

The unmanned aerial system with the serial number 2,000, a Do-DT45, will be used in a military exercise at the training ground of Airbus partner Andøya Space Defence in Norway. There, it will be launched by an Airbus team via ramp, accelerate to up to 440 knots (814 km/h) and climb to 25,000 feet (7,620 metres) depending on the requirements.

In the air, the Do-DT45 can then simulate a range of threats such as: fighter jets, drones or cruise missiles, which customers can engage in with live fire. The operation does not pose any risk: Andøya Space Defence's training site is a restricted area; the remains of the target drone are disposed of properly.

"The current volatile world situation shows that a functioning air defence is more important than ever," said Frank Härtel, Head of Target Systems & Services at Airbus Defence and Space in Friedrichshafen. "In this respect, we make our contribution to a safer world out of deepest conviction: With our aerial target drones and services, Air Defenders can prepare themselves in case of threats and save lives."

Do-DT drones are not only used as target drones. Equipped with sensors and data links, they can also be used to test the interaction of unmanned and manned aircraft for the Future Combat Air System (FCAS)or technologies for autonomous air-to-air refuelling.