This news is classified in: Defense NBC 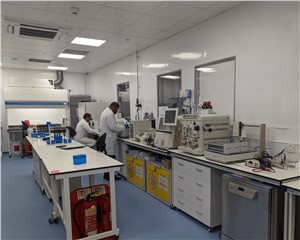 Smiths Detection, a global leader in the development of threat detection and security screening equipment, opened a biolab at its centre of excellence in Hemel Hempstead, UK. The new lab will complement the research capabilities of Baltimore, Maryland site, in developing next generation biological threat detection capabilities primarily for its BioFlash Biological Identifier.

Smiths Detection’s BioFlash is a desktop biothreat detection system that uses CANARY® technology (a cell-based biosensor) in combination with proprietary aerosol-collection techniques to rapidly identify biothreat agents from an air sample. Already the BioFlash is capable of detecting biothreats such as anthrax, ricin, botulinum toxin, black plague, tularemia, smallpox, and SARS-CoV-2. The Hemel Hempstead lab will work alongside colleagues in the US to develop new detection capabilities for known threats and be able to better respond to emergence of yet known threats.

Producing BioFlash’s BioDiscs out of Hemel Hempstead allows Smiths Detection to provide an even better service to its customers across Europe and nearby regions. The BioFlash received a CE marking in October opening the way for the product to be sold in the EU.

Smiths Detection’s Vice President of Technology, Matt Clark, said of the opening, “The new Biolab in Hemel Hempstead is a milestone for Smiths Detection and demonstrates our commitment to responding quickly to new and emerging threats and to supporting our customers in the region.”

Recently, Smiths Detection BioFlash was used at the Birmingham 2022 Commonwealth Games to support test high-security areas for the presence of SAR-CoV-2, with the UK biolab manufacturing and supplying the necessary BioDiscs throughout the Games.