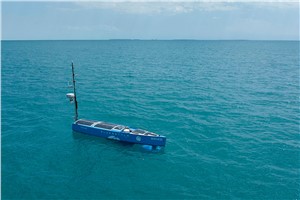 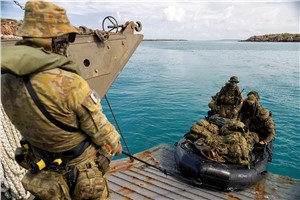 A new type of unmanned surveillance technology was used on Operation Resolute for the first time.

The seventh rotation of Army’s Regional Force Surveillance Group (RFSG) used Bluebottles, developed by Ocius Technologies, which can provide a 24/7 on-water surveillance capability, with the flexibility to be readily manoeuvred to respond to emerging surveillance requirements or tasks.

During the two-week deployment in October, the contingent conducted surveillance and reconnaissance on and around remote islands off north Western Australia for foreign fishing vessels and evidence of illegal activities.

The contingent of 18 personnel was drawn primarily from Northwest Mobile Force (NORFORCE) and 10th Force Support Battalion, with attachments from the 3rd Battalion, the Royal Australian Regiment and 1st Combat Signal Regiment.

Major Alexander Brent, the Maritime Border Command (MBC) Liaison Officer to Rotation 7, said the use of the Bluebottles, and the embedding of an Ocius employee within the task unit headquarters, added significant capability to the operation.

“In addition to persistent surveillance, we were able to use the Bluebottles to conduct more specific reconnaissance tasks, such as beach landing site reconnaissance and avenues of approach to specific islands in advance of the ground force,” Major Brent said.

“By controlling the Bluebottles remotely, the ground force was free to be able to move independently of the USVs (uncrewed surveillance vessels) and focus on other tasks, such as onshore reconnaissance and patrolling, while still benefiting from what the Bluebottles collected.”

The trial by NORFORCE will likely inform future teaming with unmanned maritime assets to support amphibious and littoral combat manoeuvres.

As one of three Regional Force Surveillance Units which form the 2nd Division’s RFSG, NORFORCE provides a persistent screen in northern Australia, living by the motto ‘Ever Vigilant’.

Several times a year the RFSG screen is supported by enabling assets, including medical teams, remote command-and-control nodes and Australian Border Force (ABF) assets to enhance the effectiveness of the screen as part of Operation Resolute.

“The soldiers conducted surveillance from observation posts, dismounted patrols across the islands and patrols in the littoral environment by watercraft,” CAPT Sewell said.

“Working alongside the Bluebottle uncrewed surveillance vessels, as well as ABF Dash-8 aircraft, the information our contingent gathered will enable potential responses from other government agencies.”

The contingent conducted surveillance and reconnaissance of about 5500 square kilometres.

Major Brent said inter-agency cooperation was vital for the continued success of operations like Resolute.

“There is a very close relationship between the ADF and ABF, facilitated through MBC, which enables shared effort and the sharing of information to achieve better operational outcomes and security for Australia,” Major Brent said.

“At the local level, the Regional Force Surveillance Units have an intimate relationship with the Indigenous communities and leaders in their respective areas of operation, which is vital to the enhanced understanding of country, patterns of life and access across the north of Australia, all of which directly contributes to the land component outcomes for Op Resolute.

“When you add contractors, local councils, local land councils and private industry, who all have vested interests in northern Australia, the level of inter-agency cooperation required to ensure successful Op Resolute outcomes is immense.”